According to RIA Novosti, Dmitry Tsorionov, the head of "God's Will," a Russian Orthodox social movement, is imploring authorities in the country to cancel upcoming concerts by Florida death metallers CANNIBAL CORPSE, saying the musicians violate Russia's anti-blasphemy law.

CANNIBAL CORPSE's eight-date tour of Russia is scheduled to kick off on October 2 in Krasnodar.

In a 2012 interview with Invisible Oranges, CANNIBAL CORPSE bassist Alex Webster defended the band's lyrics, explaining: "We've really tried hard to make our songs serious horror songs. But the ones that have the more extreme gore in them, those lyrics sometimes make the audience realize there's a bit of black humor to it, much in the way 'Evil Dead' or 'Evil Dead II' did. Those movies were meant to be frightening, for sure. But it takes some of the scare out of it because they were so over the top.

"None of our songs are written to be intentionally humorous or anything like that, but I think when you're describing something that bloody, considering the context: it's coming from a band. It's coming from a band and you're enjoying the music and you're reading the lyrics that's describing something completely atrocious, you know, and people aren't going to take it particularly seriously. When it's something a little darker… it's strange, but if you edge off the gore a little, the song becomes more frightening.

"I would say CANNIBAL CORPSE has a little bit of 'Evil Dead' to it, but we have more serious horror songs too. Not that any of them were intentionallynot serious. But when you edge the gore back a little bit and leave something to the listener's imagination, you can wind up with something scarier. That's the same way with horror movies, I think. The movies that I found to be the most frightening weren't particularly graphic, as far as violence goes. 'The Exorcist', 'The Shining' — they're two of my favorite horror movies, but they weren't particularly violent. 'Burnt Offerings', 'The Sentinel'. There's a number of dark, frightening movies that I really like and they aren't that gory at all.

"Some of our songs are 'Evil Dead'-like, but we have songs that are more like 'The Shining'."

One month earlier, Polish extreme metallers BEHEMOTH were ordered to leave Russia after being detained in Yekaterinburg for violating the country's visa regulations. 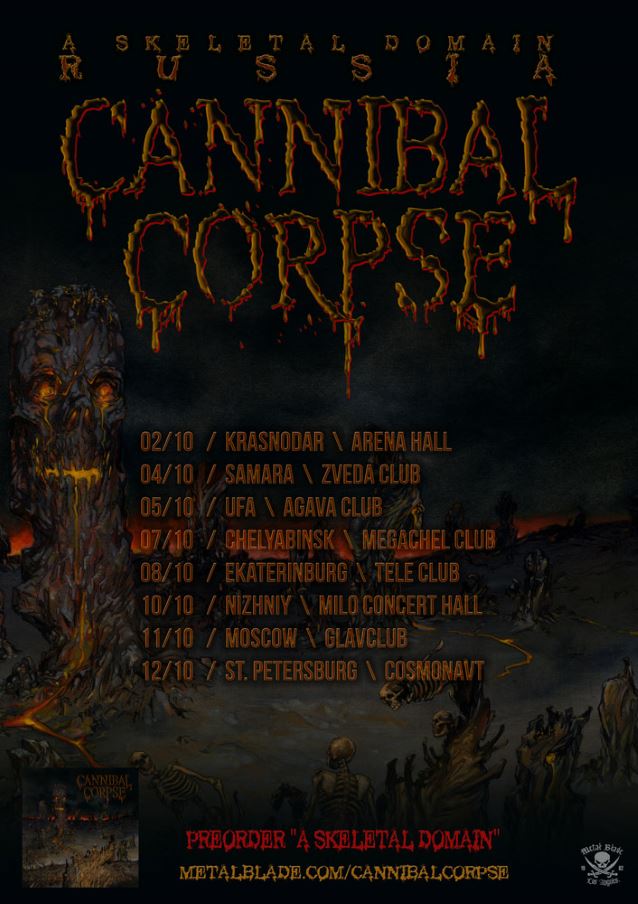