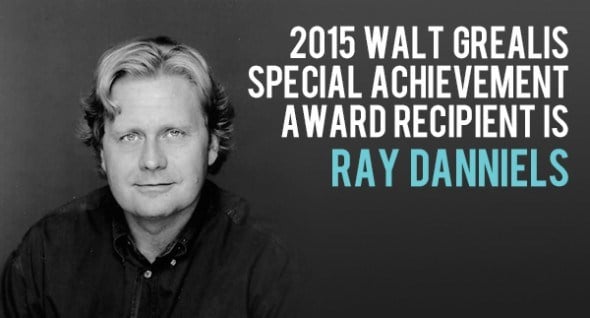 The Canadian Academy of Recording Arts and Sciences (CARAS) has announced Ray Danniels as the recipient of the 2015 Walt Grealis Special Achievement Award that recognizes individuals who have made an impact on the Canadian music industry. Danniels will be honored at the 2015 JUNO Gala Dinner & Awards on Saturday, March 14 in Hamilton, Ontario as part of JUNO Week festivities.

Ray Danniels is the CEO/President of SRO (Standing Room Only) Management Inc. and of independent record label Anthem Entertainment Group. He is also the longtime manager of Canadian trio and Rock And Roll Hall Of Fame inductees RUSH.

"I am grateful to be recognized by my peers for doing something I've loved and been passionate about since I was a teenager," said Ray Danniels. "I share this honor with those that have been with me since the beginning — the members of RUSH — Geddy, Alex and Neil."

"Ray's extraordinary intuition in business and passion for the Canadian music industry are truly something to admire," said Allan Reid, President & CEO, CARAS/The JUNO Awards. "We are very pleased to recognize Ray Danniels with the Walt Grealis Special Achievement Award for his incredible achievements and exceptional contributions."

Danniels began his career as an agent in the music business when he was a teenager, first booking bands and then moving on to promoting concerts in his hometown of Toronto. In 1971 he took on both agent and manager roles with a rock band from Willowdale called RUSH. After every record company in Canada turned the band down, Danniels took initiative by funding RUSH's first record and then starting his own label to release it. In 1973 the first RUSH single was released on Moon Records, which was later renamed Anthem. Forty years later, Anthem is still releasing RUSH albums in Canada. RUSH's 20th studio album, "Clockwork Angels", was released by Anthem in 2013, debuted #1 in Canada and went on to be certified gold. Together, Ray Danniels and RUSH created Core Music, a publishing entity where the band's entire body of work remains to this day.

In addition to RUSH, Anthem has released albums from Max Webster, Ian Thomas, Gowan, Molly Johnson, Steven Page and most recently THE TEA PARTY, BIG WRECK and Brody Dalle. Anthem has made an impact with projects that have defined Canadian culture, having released projects such as Bob & Doug Mckenzie and "The Trailer Park Boys" soundtracks. In its 40-year history, SRO Management has been instrumental in the careers of RUSH, VAN HALEN, EXTREME, THE TEA PARTY, Matthew Good and BIG WRECK, amongst others.

Danniels was inducted into the Canadian Music Industry Hall Of Fame in 2007 and was also the recipient of the third annual Music Managers Forum Canada Honour Roll Award.