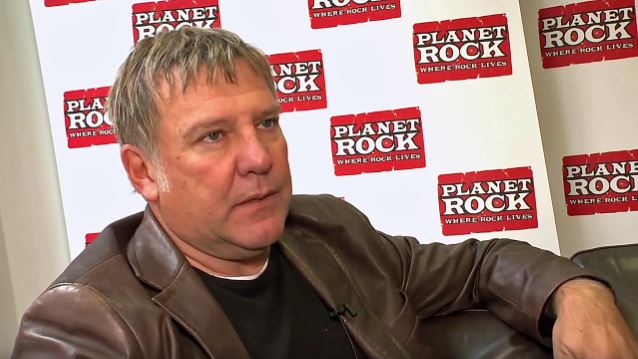 Guitarist Alex Lifeson of Canadian rock legends RUSH was interviewed for the latest episode of VH1 Classic "That Metal Show" co-host Eddie Trunk's podcast, "Eddie Trunk Podcast". You can now listen to it at this location. A couple of excerpts follow (transcribed by BLABBERMOUTH.NET).

On how his battle with arthritis has affected his playing:

"You know, you have to careful what you say these days. I've had arthritis for about twelve years that I've been dealing with — psoriatic arthritis. For me, it's primarily in my feel and a little bit in my hands. And I am a little stiffer at the end of a show, and I feel it the next day, but it's nothing, really, that gets in the way of my playing. It doesn't really hold me back. I'm just more aware of it. But I can't say that it's the reason I make mistakes. [Laughs]

"I keep hearing it now, and I almost regret ever mentioning it in the past. 'Cause everyone thinks, 'Oh, his hands are… He's got arthritis, and that's it. He can't play.' I feel it, just like we all do as we get older — aches and all of that stuff — but it doesn't impede my playing. It makes it a little more difficult, a little more challenging to do the fast stuff, and there's a little bit of feedback that I get from it the next day, but it's nothing that really stands in the way."

On what he is doing to deal with his psoriatic arthritis:

"I've been on a biologic medication, Humira. You've probably seen the ads for Humira. And I've been on it for, I think, about four years now. So it was good. I went through a lot of different medications that were very difficult on my system and they had a lot of side effects. So I switched to Humira and now I'm doing an ad for them. And it's really worked well for me."

On whether RUSH's current tour is the band's last-ever full-scale run:

"Well, I love what we're doing. I think we're playing really well. The show's working great… all of that stuff. Clearly, Neil [Peart, drums] has not enjoyed touring… the touring aspect for a long time. And he has a young family, and he has all his own reasons. It's become difficult for him to play, and he has health issues as well. I think he mentioned in the Rolling Stone article that playing, for him, is like running a marathon while doing mathematical equations. So it's very challenging, it's very athletic, and at almost 63 years old, it's a lot more difficult. It's a three-hour show. We can't get away from it. We were supposed to cut back on this tour. We can't. Maybe in the future, there's an opportunity to change things up a little bit, the way we do it. I think, in my gut, that this is probably the last major tour that we'll do. I like to think that we'll do specialty gigs — maybe a week in New York, or something like that — but we haven't even discussed that. We just wanna get through this tour and see where we're at. We wanna discuss whether we're gonna make another record anytime soon… a lot of things.

"Whatever this tour is, it's not the end of the band. It's just… kind of, reviewing where we're at in terms of major tours. And that's kind of what it is.

"Whatever it is… if it is the end of touring, I feel good that we're at least playing as well as we are, that we've developed a show that's really, you know, quite something in terms of our historical story. And it's nice to go out on a note like that, if you are — at the top of your game, or close to the top of your game.

"I would hate to think that we would be one of those bands that would do a couple of weeks in [Las] Vegas — for what reason, I don't know… Ten shows at Madison Square Garden, well, that's a little different. And you bring people in from all over the country. I'm not saying that's something we will do, but that is an option, or it is something that you could put together instead of doing a major tour, and bring people to the venue. Vegas is not the kind of environment, I think, for us. We certainly wouldn't be happy doing something like that."

On whether Peart's problem with touring has more to do with his dislike of travelling and being away from home than health issues:

"Well, yeah, it's that, and he has other interests. And I think he's happy being at home and doing the stuff that he does."

On whether RUSH has written any material for a new studio album:

"[We don't do any writing] while we're on the road. I've got a ton of stuff that I've been writing over the last couple of years… well, more than that. And I know if Geddy [Lee, RUSH bassist/vocalist] and I sit down together, we'll start that engine up fairly quickly. And we've talked a little bit about doing that. And I wouldn't doubt that, in the fall, we would get together and maybe start jamming or just playing together. He's really in an interesting space right now. He loves being on the road, he loves working. He's very healthy, feels great. And he's had a bit of a renaissance, I think, with the whole idea of playing in the band and everything that it means. So he's raring to go. It's a little bit of a, you know, tug both ways."

RUSH kicked off its "R40 Live" 40th-anniversary tour on May 8 at the BOK Center in Tulsa, Oklahoma. The concert featured no opening act and contained a number of video vignettes created for the tour, including an animated sequence shown at the start of the show that displayed the progression of the trio throughout the years.

The "R40 Live" tour wrapped on August 1 in Los Angeles, California at the Forum.