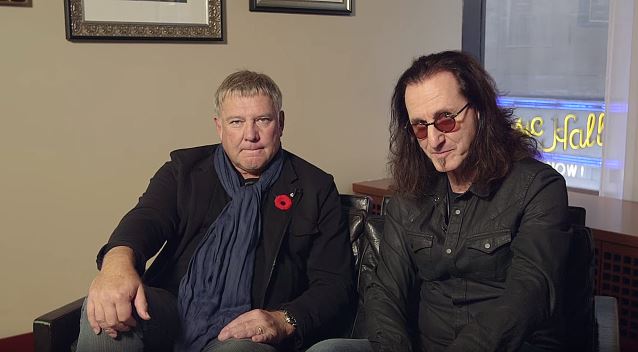 Asked about his legendary Rock And Roll Hall Of Fame induction speech consisting entirely of "blah blah blahs," Lifeson said: "Well, it just seemed like a good idea at the time. I had a speech written and I was trying to memorize it and I couldn't remember it. And I thought I might as well just [go] 'blah blah blah.' And I thought, 'Well, that's a good idea.' And so I thought it would tell the story of our history and how we got to that stage without using any words. And the interesting thing is that everybody remembers my speech."

In Lifeson's Rock Hall speech, the guitarist changed the tone of his voice to exhibit a range of emotions — with everyone understanding what he meant, especially when he "described" getting the call that the band was being inducted.

"I had no idea he was doing that," Lee later told Rolling Stone. "Let me go on the record to say he didn't tell us he was doing that. In fact, I know he had a whole other speech planned. Neil [Peart, drums] and I thought he had lost his marbles when he was talking. You can see the look on our faces behind him going, 'What the fuck is he doing?' And of course, we couldn't see him act it all out. We just kept hearing, 'blah blah blah blah blah.'"

He continued: "I don't know what his pure intent was, but I think it was more a knock on speeches, the whole process of the Hall Of Fame induction thing.

Lee added: "He's a mental case. And he's genuinely one of the funniest people you would ever meet in your life. But I wanted to kill him at the three-minute mark. Neil and I were threatening to knock him on the head and drag him offstage."