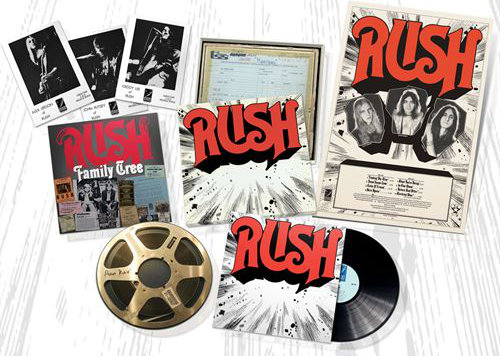 The RUSH "ReDISCovered" LP box set will be released on April 15 via Anthem/Universal Music. A contents trailer can be seen below.

2014 marks the 40th anniversary of RUSH's debut album. This release features the band's classic first vinyl album remastered with impeccable care at Abbey Road studios by Sean McGee, who has been previously responsible for all recent THE BEATLES vinyl remasters.

The "ReDISCovered" vinyl is encased in a 12x12 high-quality box. Pressed on audiophile 200-gram vinyl on the Direct Metal Mastering process, this is the highest-quality vinyl currently available. This release contains a re-production of the original 1974 Canadian retail poster (only 500 were ever originally printed) and individual Moon Records publicity photos of Geddy Lee, Alex Lifeson and original drummer John Rutsey. This release also contains a first time ever Rush Family Tree, tracing origins of the band dating back to 1965 and a memorabilia collage of early Canadian and U.S. gig ads, reviews, photos and the first-ever RUSH bio.