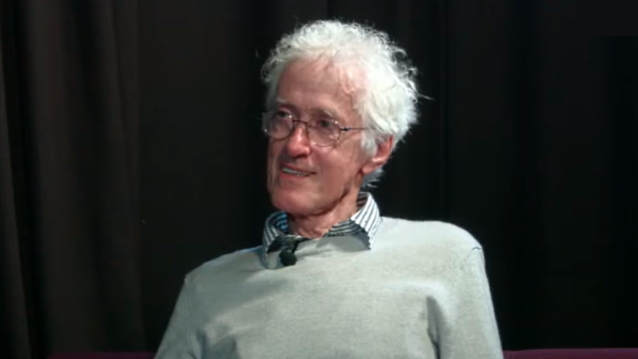 Hine was a board director of The Ivors Academy, which confirmed the news of his passing.

"We are so saddened to post that our Board Director Rupert Hine has passed away," The Ivors Academy wrote on Twitter. "Rupert played an integral part in shaping the organisation, and his passion, wisdom, inspiration and his immense kindness will be hugely missed."

Engineer Stephen W. Tayler, who worked with Hine on the aforementioned RUSH albums, paid tribute to his colleague on Facebook, writing: "So sorry to have to say goodbye to my dearest and oldest friend — and partner in crime — Rupert Hine. We shared so many wonderful journeys and adventures in the process of working with so many great artists and projects. It has been a true privilege to have been so close to this charming, kind and creative soul with the most wicked sense of humour."

RUSH said in a statement: "In the wee hours of this morning our dear friend and super talented musician, songwriter, and producer of two RUSH albums, 'Presto' and 'Roll The Bones', sadly passed away.

"Roop was always such an upbeat, unflappable and all around lovely 'chap' to work with and to be around. His influence on our music and on our attitude towards enjoying life was profound and he shall be sorely missed by so many.

"There are still many of his very 'British' expressions that have made their way permanently into our lexicon and we can see his smiling face and the twinkle in his eye whilst saying, 'Jolly D!!'

For over 40 years, Rupert had been writing and producing music for a variety of bestselling artists. He had wide-ranging musical accomplishments, both commercial and domestic, and had written the foreword for Billboard's "Encyclopaedia Of Record Producers" – the definitive reference work on music producers.

The book itself states that "few producers have worked with as wide a stylistic range of gold and platinum-selling artists as Hine," and goes on to discuss his significant work under the commercial radar, as well as the work he's produced under his own name, as Thinkman and with the 1970s band QUANTUM JUMP. He has scored films and contributed songs to movie soundtracks as a composer and musician, and has directed a number of video clips for the artists he has produced.

A champion of technology and of the incorporation of the digital into art and creativity, during his career he has pioneered electronic music interfaces with the fledgling MIDI. As a result, in the 1990s he was invited by Apple to help demonstrate the power of their ground-breaking software engines to the most creative thinkers in the music industry. In 2011 he was awarded APRS Fellowship (Association of Professional Recording Services) in recognition of "outstanding contribution to the art, science and industry of sound recording."

Hine's musical and artistic diversity has made him a leading authority on creative communication, and as a result, he was a founder of the Music Producers' Guild and the International MIDI Association, and was a member of the National Academy of Recording Arts and Sciences in the U.S.

2008's third most downloaded album worldwide, "The Art of Peace – Songs For Tibet", was produced by Hine for the Dalai Lama, and featured a host of some of the leading musicians of the time. More recently, in 2015, "Songs For Tibet II" was released, also produced and co-ordinated by Hine. This second edition is a tribute album celebrating the Dalai Lama's philosophy of peace, non-violence and compassion — as well as His Holiness's 80th birthday.

Hine is also an active environmentalist, and in 1990 he worked with Kevin Godley to produce "One World, One Voice" for the BBC. This consisted of 300 assembled musicians, including Peter Gabriel, Sting and Bob Geldof, to create the first global composition for mankind. This musical chain letter travelled the world, with Hine improvising its form. It was ultimately seen by more than 650 million people in 26 countries on the same night.

Survivors include his wife, Fay, and a son, Kingsley.

We are so saddened to post that our Board Director Rupert Hine has passed away.


Rupert played an integral part in shaping the organisation, and his passion, wisdom, inspiration and his immense kindness will be hugely missed.

A full tribute will be up on our website shortly pic.twitter.com/jKFtViLrUF