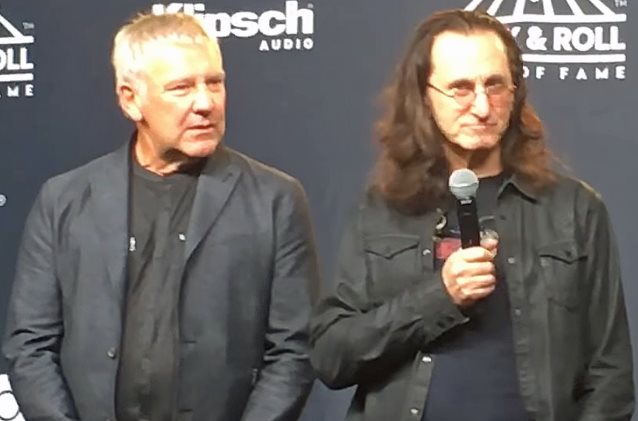 RUSH's Geddy Lee joined members of YES on stage at the Rock And Roll Hall Of Fame induction ceremony to perform the song "Roundabout".

Lee and RUSH bandmate Alex Lifeson inducted YES into the Rock Hall, with the bassist/vocalist stating: "It's not overstating things to say it changed the way I played and listened to music forever. So here we are, decades later, and the music of YES is still echoing down through the years, showing me that music truly is a continuum." Lifeson described YES as "my gateway band in so many ways. There's nothing so fleeting yet enduring about the way music feels when you're 17 years old."

Following "Roundabout", Lee left the stage and the remaining musicians performed "Owner Of A Lonely Heart".

Asked what it was like to learn Squire's intricate bass parts, Lee told the press: "At first, difficult. After a while, difficult. They're a very precise band. Chris Squire was one of the most inventive-sounding bass players ever. So to play his parts… I mean, it's one thing to mimic his parts — you can mimic anything if you practice it — but to write those parts is sheer brilliance. It was a great honor for me to step in."