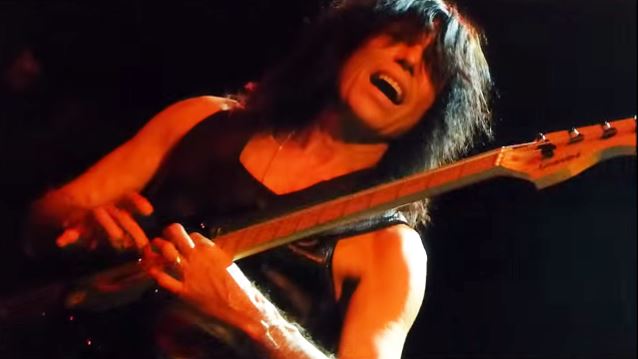 Legendary bassist Rudy Sarzo (ex-QUIET RIOT, OZZY OSBOURNE, WHITESNAKE) recently spoke to Guitar World magazine about one of his trademark onstage moves: licking his fingers. Regarding how it came about, Sarzo said: "If the music inspires me to do certain moves, I do them because they are all part of the flow. But what inspired me to lick my fingers was that I used to play the old-school flat-wound strings. I've been playing bass long before round-wound Rotosound strings. The flat-wound strings used to get stiff because they had no grooves, so I started licking my fingers so I could pluck the strings without hurting my fingers. This was before I learned about boiling strings, which is what I do now. I get one show out of each set of strings; then I boil them and play them again. I like my strings to be supple. I still lick my fingers today because it's part of my personality.

Guns and Sarzo are also involved with DEVIL CITY ANGELS alongside POISON drummer Rikki Rockett and vocalist Brandon Gibbs. DEVIL CITY ANGELS' self-titled debut album, which was produced by the DEVIL CITY ANGELS bandmembers themselves in Los Angeles and was mixed in Nashville by Anthony Focx, will be released on September 18 via Century Media.