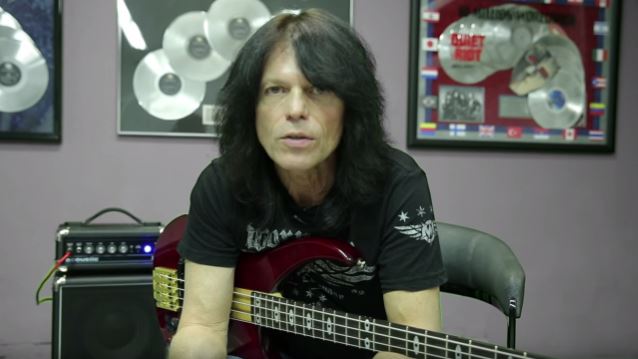 Legendary bassist Rudy Sarzo (ex-QUIET RIOT, OZZY OSBOURNE, WHITESNAKE) was interviewed on a recent edition of "The Shoe With Miles Schuman", the Internet radio show hosted by 15-year-old Miles "The Shoe" Schuman. You can now listen to the chat using the Spreaker widget below.

Speaking about why he is not involved with OPERATION: MINDCRIME, the new band led by former QUEENSRŸCHE singer Geoff Tate, after previously touring extensively with Geoff's version of QUEENSRŸCHE, Sarzo said: "It was clearly time for me to move on. You have to take into consideration, when you're working with such a strong visionary as Geoff Tate, you're basically providing a service. And after doing that for about a year and a half, I felt like it was time to move on and actually do something that was a collective vision. Just [as I am doing now] with Tracii Guns [GUNZO and DEVIL CITY ANGELS guitarist]; it's a collective vision. We talk about music, and things are being created collectively rather than [one person calling all the shots]. Which is all right — I've done that, and I've enjoyed it — but then also I need to be creative."

Guns and Sarzo are also involved with DEVIL CITY ANGELS alongside POISON drummer Rikki Rockett and vocalist Brandon Gibbs. DEVIL CITY ANGELS' self-titled debut album, which was produced by the DEVIL CITY ANGELS bandmembers themselves in Los Angeles and was mixed in Nashville by Anthony Focx, will be released on September 18 via Century Media.