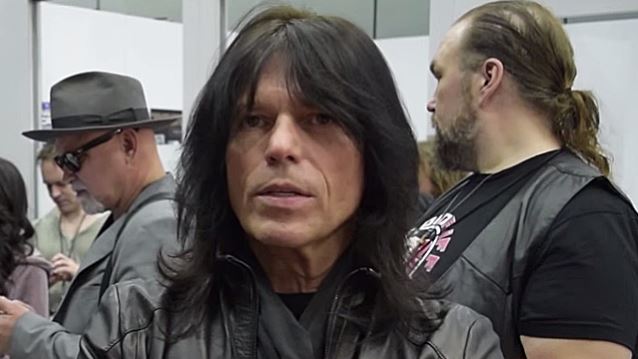 Sarzo is featured in "Hired Gun", a new documentary spotlighting session musicians. The film, which is being produced by FIVE FINGER DEATH PUNCH guitarist Jason Hook alongside documentary filmmaker Fran Strine and music manager Jamie Talbot, chronicles the story of world-renowned musicians who are not household names, but are instead the backup musicians who have performed at concerts and on countless recordings with huge stars yet remain largely unknown to the public.

"Hired Gun" goes behind the scenes and explores the personalities and creativity of the best session players and backup musicians in the world, ranging from pianist/harpist Corky Hale, who has played with Tony Bennett and Frank Sinatra, to rock guitarist John 5 who has played with Rob Zombie and Marilyn Manson.

The film goes behind the scenes and explores the personalities and creativity of the best session players and backup musicians in the world, ranging from pianist/harpist Corky Hale, who has played with Tony Bennett and Frank Sinatra, to rock guitarist John 5 who has played with Rob Zombie and Marilyn Manson.

Speaking about his long career as a "sidekick" to some of rock's biggest names, Sarzo told Metal Life: "It's interesting. I mean, if you look at the trajectory of any band leader, or solo artist, whatever you wanna call it, or even bandmember, you always get it like… A good place to start is to get into somebody else's band. For example, when I was originally in QUIET RIOT with the Randy Rhoads version of the band, we couldn't get a record deal, so Randy joined Ozzy. Even though [Randy] was [Ozzy's] writing partner, he was still considered a hired gun, but he really wasn't, because he was such an intergral part of the composition [process] amd the way that he played and performed. And he was never treated like a side person, and neither was I when I joined the band. We all traveled together, we all stayed in the same hotels. We were treated as a band. And then, from there, I went on to actually rejoin what became the 'Metal Health' version of QUIET RIOT. And now I'm an equal member with all the guys. So, yeah, it helps a lot to break into the industry by being a member of somebody else['s band], or like in the case of Ozzy, he went from being a member of BLACK SABBATH to being solo. So he was starting out. And we were also kind of starting out at the same time, but he was the one with the notoriety from BLACK SABBATH. And he had a record deal."