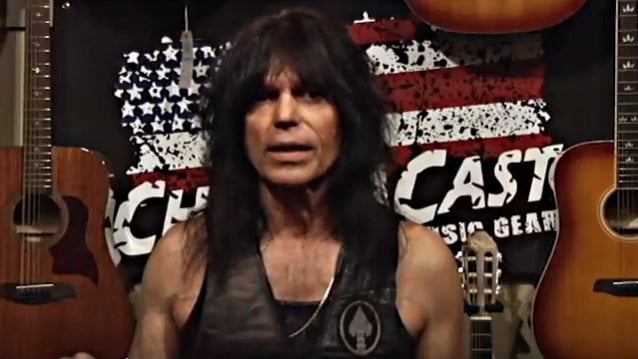 During an appearance on "Talking Bollocks", the monthly metal podcast hosted by ACID REIGN frontman-turned-stand-up-comedian Howard H. Smith, Spitz stated about his new band: "We have a singer; I just can't say who it is yet. But it's pretty monumental. It's killer. And it's not a project; it's a band. And, of course, Deen is one of the world's most incredible drummers walking the planet. You first think of him as [having played in] JOURNEY. Deen's also a lead singer. He sings three or four of the JOURNEY songs live as he plays [the drums]. He sings the ones that Steve Perry wouldn't even sing live. He's quite an incredible singer. He's the lead singer for REVOLUTION SAINTS and just a great guy and a monster, monster, monster drummer. He got his start in SOCIAL DISTORTION, and he's just a metalhead, really. [He spent] seventeen years in JOURNEY, he played for Ozzy [Osbourne], he played on early Ted Nugent albums. I mean, it goes on, dude. He's pulling out stuff, and I'm, like, 'Are you kidding me, dude? I used to sit and just do bong hits and blast my guitar listening to that album. Are you crazy? I didn't know it was you.' [Laughs]"

Asked if the vocalist in Spitz's and Castronovo's new band has a thrash background, the guitarist said: "I'm not gonna say anything. 'Cause what I create is always new. Was [ANTHRAX's] Joey Belladonna a thrash singer when I found him in a JOURNEY cover band in upstate New York? We can take someone like Joey and get him to sing and fit in. I don't hold any barriers to anybody."

According to Dan, "the whole cycle" for his new band with Deen "will be starting in the beginning of July as far as all [of us being] in one room." He added that he has already completed writing "about an album and a half" worth of material for the project, with plans to have "about two albums' worth" of songs to choose from.

Spitz, a born-again Christian and Messianic Jew who frequently cites his faith as an influential component to his life, explained that he decided to launch a new group with Deen because "it's just time now to play again… I have a lot more music in me. I don't know where or what. I don't ask questions and I don't sit around the table and whatever. However God gets it to fall into place, it is what it is, and away we go."

After leaving ANTHRAX for the first time, Spitz became a world-renowned, prize-winning watchmaker who hand-lathed his own replacement parts for antique watch restorations.

We welcome our Metal brother in arms legendary bassist @rudysarzo into his permanent position. @DeenTheDrummer & I are super stoked ? pic.twitter.com/JYo5aee2rU