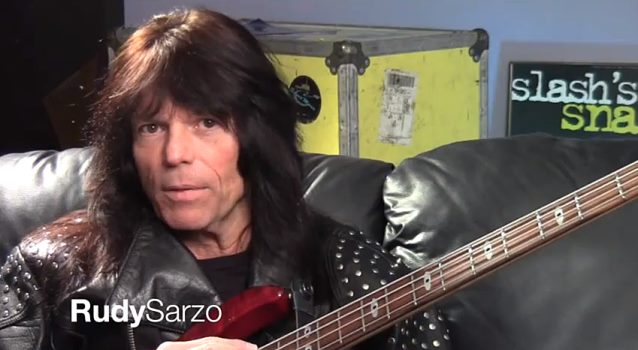 James Anaya of "The Hellion Rocks" on Bleach Bangs Radio recently conducted an interview with legendary bassist Rudy Sarzo (OZZY OSBOURNE, DIO, WHITESNAKE, QUIET RIOT). You can now listen to the chat in the YouTube clip below.

Asked about his current gig as the touring bassist for the Geoff Tate-fronted version of QUEENSRŸCHE, Sarzo told Frankie DiVita, radio personality at Southern California's 96.7 KCAL Rocks: "[The reception from the fans has been] incredible. I mean, going out there and just watching the audience react to what we're doing. We're actually performing the whole 'Operation: Mindcrime' record — every single song — and it's just such an iconic album; it's a timeless piece of music."

Regarding how performing with QUEENSRŸCHE is different to what he has done with his previous bands, Sarzo said: "I have not in the past ever toured doing a concept album. Once you do a concept record, you perform it live, you're telling the story for an hour-plus rather than telling vignettes, which is separate songs. So it's a whole different mindset, because there's much more to grab onto as a performer. Rarely do you ever get to perform a whole album, even if it's the band or the album that you recorded… unless it's the first tour, like [with QUIET RIOT's] 'Metal Health', yes, we did the whole album, because that's all we knew. And we started headlining, so we had to, like, find rejects — songs that did not make the album — and start including them in the set. But as far as a concept album, that there's a storyline to it, it's a very unique situation, to go on stage like that."

On the topic of what it's like to perform with Geoff Tate, Sarzo said: "Oh my God! He's unbelievable. Just to be on stage next to him — the power and his passion, it's contagious."