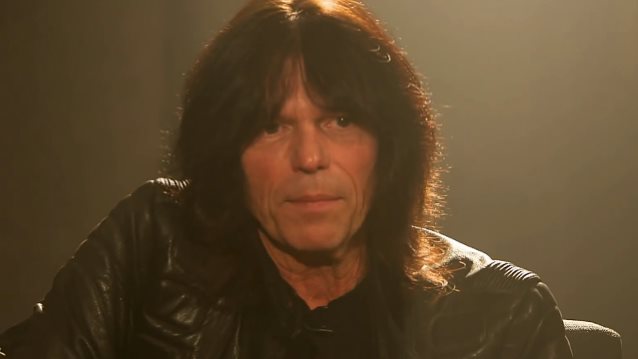 Bassist Rudy Sarzo, one of the most legendary and respected names in hard rock history — having played alongside Randy Rhoads in QUIET RIOT and OZZY OSBOURNE, as well as toured and/or recorded with WHITESNAKE, DIO, BLUE ÖYSTER CULT and now in Geoff Tate's QUEENSRŸCHE — was interviewed on episode 107 of the "Let There Be Talk" podcast with rock and roll comedian Dean Delray. You can now listen to the chat using the SoundCloud widget below.

In a 2012 interview with Guitar World, Sarzo was asked if still sees Rhoads' influence today — and if he still thinks about him. "I think about him enough to have to sit down and write a book to answer the No. 1 question I get asked around the world: What was it like to play with Randy Rhoads?" Sarzo said. "He's such an influential musician even today, 30 years after his passing. The way I put it is, in any post-Randy Rhoads guitar player, I always hear some kind of influence in their performance, even in their compositional style. Every time I receive an email or a message on Facebook or whatever, from kids, young guitar players, 10, 14 years old, they say, 'Man, I discovered Randy Rhoads. He's my favorite guitar player.' That really touches me because it's great to hear a new generation giving Randy the credit he deserves for being the well where most guitar players drink from. He has influenced generations and still does.

"So do I think of Randy every day? Of course I do. We all do. All of us that got to know him and perform with him. We have that common. We'll never lose that bond, that thread, our admiration toward Randy as a musician and as a friend."

Sarzo was also asked if his feud with the Ozzy camp was all in the past now. "Yes, yes," he said. "Silly things happen. If you look at the big picture, you look more at what we have in common than what we have not. At the end of the day, that's what always takes precedence. Everything is really wonderful between the Osbournes and me, which is the way it should be. Because if you ask me what the most significant group in my career was, it has to be being a member of the Ozzy Osbourne band. They gave me my first break, they took a chance on me, a complete unknown, just based on Randy's recommendation. If it wasn't for them we would probably not be having this conversation. I owe my career to Sharon, Ozzy and Randy Rhoads."