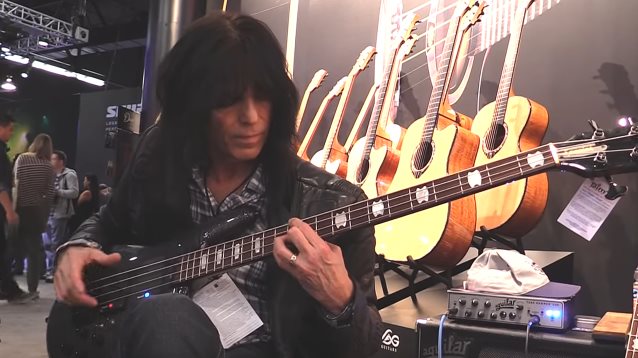 Legendary bassist Rudy Sarzo was interviewed by Premier Guitar at this year's NAMM show, which was held January 19-22 at the Anaheim Convention Center in Anaheim, California. You can now watch the chat below.

The Rudy Sarzo signature bass from Spector was officially announced at NAMM in a black stain finish.

Asked by The Los Angeles Beat what started him on the road to playing bass, Rudy said: "I started out playing guitar, an old craftsman acoustic. Every block had a band back then, and I went to the local band and asked to join. They told me they already had enough guitar players and I'd have to play bass. It didn't hit me until recently when someone asked me that question; I'd been living my life according to someone else's idea of what I'm doing. But no matter how much I play guitar, I always go back to the bass, it's my home. When I put the bass in my hands, it's like a clean canvas."

Regarding how he prepares for gigs where he didn't play on the record, Sarzo told Bass Player magazine: "When I join a band like WHITESNAKE, OZZY, DIO or BLUE ÖYSTER CULT, I study the catalog. I study everything that has been recorded, and I look at the growth of the band and their live performances. Having said that, as a bass player, I am most affected if the drummer who recorded the songs is no longer in the band, especially if it's somebody who has a different internal clock. Tommy Aldridge, for example, leans forward [plays on top of the beat] when he plays. He played a lot of boogie blues in stadiums with BLACK OAK ARKANSAS, and he brings all that with him, whether he's playing with Ozzy or WHITESNAKE, so I can't play with the same feel that's on the record. You have to listen to what the drummer is doing and lock in with him; I have to lock in with Tommy. Fortunately, with OZZY, Randy [Rhoads, guitar] also naturally leaned forward, so all I had to do was lock in with the two of them."