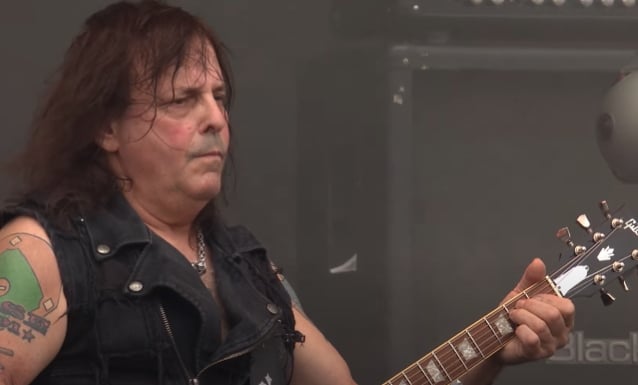 In a new interview with Greece's Rockpages.gr, former MANOWAR guitarist Ross "The Boss" Friedman was asked to name the biggest mistake of his career. He responded: "The biggest mistake in my career… Hmm… Well, I've made a couple, boy, let me tell you that. When I produced ANTHRAX — I produced [the] ANTHRAX [demo] and got them signed to Megaforce, with Jon Z… And Jon Z just told me that: 'It was because of you I signed ANTHRAX.' And, of course, METALLICA was in the picture. And METALLICA was gonna ask me to produce them too, and I think that something happened — I don't know; I never wound up doing it. Looking back on it, I should have pushed that. I would have been on METALLICA like ants on honey, bees on honey. Man, why was I just not aware of that?"

Friedman previously discussed his ANTHRAX production work in a 2020 interview with Eonmusic. Speaking about how the collaboration came about, Ross said: "When MANOWAR first started playing in New York, ANTHRAX were the opening band. They were very nice guys, and it got around that I was a good producer, that I worked very well with people, and Scott Ian [ANTHRAX guitarist] talked to Jonny Z and kept bugging him for a record contract. Jonny Z goes, 'Well, why don't you ask Ross to produce some stuff for you, and get back to me?' So Scott came up to me and said, 'Ross, would you like to produce ANTHRAX?' And I went, 'Okay, sure.' And we went into the studio and we cut 'Howling Furies' and then we cut 'Soldiers Of Metal'. This was their first time in the studio, and 'Soldiers Of Metal' in particular came out very well. So they gave it to Jonny Z, and Jonny Z signed them."

Asked what the ANTHRAX recording session was like, Ross said: "They were young, and Scott was hungry. I lent them my Marshalls. It was very productive. They had Danny Lilker and Neil Turbin, and it was Charlie's [Benante] first time in a studio."

As for what he thought of ANTHRAX's music, Ross said: I thought they were pretty good. I thought that what they were doing, this new sound, this thrash sound, I thought it was really pretty good. And I knew how dedicated they were, and I knew they were going to be okay. Once we started them out there, I had a feeling that it was going to be good. And it was a great time, because there was MANOWAR, and there was METALLICA, and there was ANTHRAX, MEGADETH — everything was happening, everything was starting. I think they were in the right spot at the right time."

Asked if he would have liked to have produced ANTHRAX's debut album, "Fistful Of Metal", Ross said: "I would have done it, but you know how things happen — probably I got busy doing another record or communication didn't happen. But I'm glad I did what I did."

With Ross's main focus turning to metal music at this time, two additional projects were launched — DEATH DEALER and his solo outfit, ROSS THE BOSS.