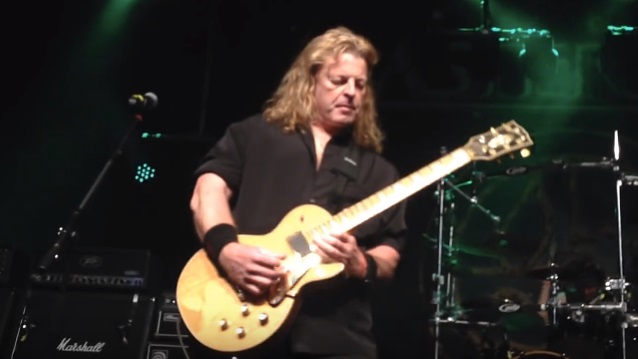 Tony Webster of the "Metal Command" radio show recently conducted an interview with former HELLOWEEN and current MASTERPLAN guitarist Roland Grapow. You can listen to the entire chat below. A few excerpts follow (transcribed by BLABBERMOUTH.NET).

On the current state of MASTERPLAN:

Roland: "I just finished a couple of [studio] productions like LORDS OF BLACK and KILMARA and I've started with the next band, they're called BLACK MAJESTY. I'm thinking I'm doing their fourth album already. We have a lot of festivals this year going on with MASTERPLAN and some small touring in Spain. Yeah, we got offered another festival in Spain; it was a call from our promoter. Basically, it was our ex-promoter, but today I got a question about a little touring in Italy. It's funny. Something is going on all the time with MASTERPLAN. New album… that's the only problem. [Laughs] I started or will start this month with the songwriting. We [started] already two years ago, we have three or four song ideas [ready]. We've been basically a little bit lazy with that. But, I hope we get the album done, the next normal studio album in October. That's what I really hope, because it's time."

On not being invited to join HELLOWEEN's "Pumpkins United" reunion tour:

Roland: "There was a couple of fans writing me saying that they saw the show without me and said that they miss me in South America and blah, blah, blah. They started writing me big letters and I said, 'I answered once and it was nice.' But then, with social media, you can say whatever you will. I think, if you're too positive, then they think, 'Okay, I still believe he's bitter and he's not feeling good about that.' Because they put themselves with that fantasy with their own personality into this kind of situation because they think I am. They don't know what I'm doing. I'm really happy. I have a beautiful wife; I have a wife; I have a studio, a big house. I'm healthy, so far as I know. That's the main stuff and I'm surviving. Surviving means I can live. I'm not rich, but I have a lot of passion for music still. I love my job. My job is music producer more than guitar player nowadays and that's what I love. Of course, sometimes you meet fans, especially it doesn't matter which country, you talk with fans then they say, 'Some friends of mine, they say you are really arrogant and I don't think you're arrogant.' I say, 'Why do they think I'm arrogant?' They don't even know. Maybe it's because of some interviews I did. Then I feel sad. Why do you give interviews when you say something and try to be positive and they still think you're negative? I don't understand it. This is so unfair to my personality because I'm not negative. I don't think I'm frustrated. I don't think I am a bad person at all. It's just why some fans know everything better? Because they're more fans of the other members, which is okay. You don't need to have the same sympathy for everyone. It's not fair to say 'This guy is bad or negative because he looks strange or something or has a fat ass.' [Laughs] There's no respect anymore, especially on the Internet or media, social media. I'm still old-school, so I grew up in the '70s and my idols came from the '60s, which was the hippie era. Everybody had long hair and everybody was cool. We had just the best music we could have. We never talked bad about other people. I had so many bands I liked and I loved all of these guys. I never said, 'This guy is better because he's cooler.' Or because something that he said in an interview."

On sticking to his stance that he's okay with not being part of the HELLOWEEN reunion:

Roland: "You see, I'm not really living in the past or analyzing what I did. But I think at the time, when we did the 'PumpKings' album [which featured re-recordings of HELLOWEEN songs that Grapow wrote], they all thought it was kind of a revenge or something… now I remember. To me, it's just a relaxing situation. I took my songs and put it in a new costume with new band members. That's it. I forgot about it already. The only difference is that we played 'The Chance' the last three or four years already. That was before we did the album. We played Moscow and it was the first time we played 'The Oath' and it was unbelievable. The fans loved it. The band loved it because it's different than our MASTERPLAN style, but it still fits very well. For me, it was a bit of déjà vu. It was a great feeling. Somehow, you see this [HELLOWEEN] 'High Live' situation from the DVD from the '90s and you have less people for the shoot, but you see happy people and they were acting the same kind of, raising their hands on the right rhythm and singing along with us. It was cool. That's when they realized we did the album and they were talking too much about 'revenge' and I was sad that I did just to give them bad feelings. I never had this in my mind. It's just a bit coincidental because I delayed this album for two years and it came out at the same time when the reunion tour came."

Grapow joined HELLOWEEN in early 1989 as the replacement for founding guitarist Kai Hansen. Grapow was originally discovered in a Hamburg, Germany club playing with his band RAMPAGE by HELLOWEEN guitarist Michael Weikath, who kept Grapow's name in mind in the event Hansen would potentially leave HELLOWEEN. Grapow proceeded to complete the touring cycle for the band's classic 1988 "Keeper Of The Seven Keys Part II" album.

Grapow and drummer Uli Kusch were dismissed from HELLOWEEN in 2001 because of disagreements over the direction of the band's "The Dark Ride" album, which saw an increased focus on darker and modern metal elements. Grapow and Kusch formed MASTERPLAN a year later, securing the services of Norwegian vocalist Jorn Lande.