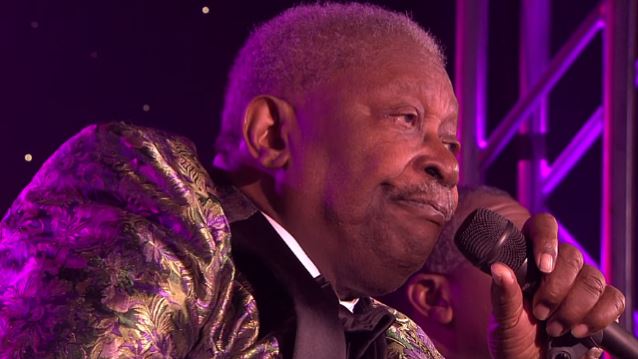 Legendary blues artist B.B. King died at the age of 89 on Thursday night (May 14). King's lawyer reported that King passed away in his sleep at his home in Las Vegas, according to The Pulse Of Radio. He had long suffered from Type II diabetes and canceled a tour last October due to ill health. He never performed live again.

Known for classic songs like "The Thrill Is Gone", King was a touring artist for more than 50 years averaging 275 shows a year. He also released more than 50 albums since the 1940s, was inducted into both the Rock And Roll Hall Of Fame and the Blues Hall Of Fame, won 15 Grammy Awards — including a Lifetime Achievement Award — and was the recipient of Kennedy Center Honors from President Bill Clinton in 1995.

Ranked No. 6 on Rolling Stone's 2011 list of the 100 greatest guitarists of all time, King influenced generations of blues and rock guitarists and was one of the biggest blues artists to cross over from regional success to mainstream and commercial fame within his own lifetime.

Born in Mississippi as Riley B. King on September 16, 1925, King worked in the cotton fields as an orphan before starting on the path that made him a living legend and a national treasure.

Rest In Peace BB King! You shared this wonderfully expressive music with the world, influenced a lot of my early...

RIP B.B. King - thank you for the inspiration and music!

God bless you BB... Rest in peace my friend. Thank you for all that you did for this kid and so many others. An extremely sad day to say the least.

BB King a dear friend and inspiration to me....

B.B. King you were and always will be a legend in your own right. RIP B.Bhttps://m.youtube.com/watch?v=4fk2prKnYnI

Rest in Peace MR BB King! Thanks for all that amazing music! Right down to my soul! #legend

My heart goes out to BB King's family and all who loved him. A great friend and an amazing guitar player left us peacefully today. We will all miss you BB. RIP

Rest In Peace B.B King!!! Thank you for everything you have contributed to music and humanity. ❤️ Tom Maxwell. 󾠔󾠔󾠔

God Bless B.B. King, his family and all fans around the world. He touched many hearts with his spirit & God given talent! Heaven just received The King of Blues. Love & Respect...

So sad to wake up this morning and hear the news about the passing of the great B B King.

Nobody lives forever but their music can.Thank you B.B.King for all those beautiful gems you gave us in your 89 years here. RIP

Rest in peace to one of the greatest of all time: B.B. King pic.twitter.com/4CszTiYbCr

The thrill is gone but never-to-be forgotten. Rest in peace B.B. King?