The times they are a-changing, but luckily there remains one constant: great music will live forever and in the catalogue and reissue world that has never been more relevant.

In the land of rock, that's hard rock, heavy rock, classic rock or, call it what you will rock, no label has won more acclaim and earned respect than Rock Candy Records. Owned and founded by former music journalist and A&R man Derek Oliver, Rock Candy has focused on breathing life into records that deserve a place in the pantheon of rock history.

Operating out of London, England for the last eight years, the label specialises in revisiting some of the most important and significant records from the '70s, '80s and '90s.

From Ted Nugent to Rick Springfield, by way of QUIET RIOT, DOKKEN, Billy Squier, TOTO, RATT, REO SPEEDWAGON, L.A. GUNS, Ace Frehley, HANOI ROCKS and KANSAS, the label has re-activated some of the greatest records of the last forty years, buffing them up, and re-positioning them as 24 Karat diamonds. To date, Rock Candy has re-released over 300 titles in Europe.

Rock Candy has made a concerted effort to dig deep and unearth a string of lesser known acts and records ripe for reappraisal, albums that have always been hot on the collectors market but overlooked at the time of release or just slipped below the surface through no fault of their own. Records by MONTROSE (the band who wrote the track that inspired the company's name), HUGHES/THRALL, THE GODZ, BLUE MURDER, SMASHED GLADYS, GIRL and BLACKFOOT) have all been brought back to life for a victory lap. Having conquered Europe, Rock Candy has now set up shop in North America, happily partnering with industry powerhouse RED Distribution.

It's a match made in rock n' roll heaven and one that will shortly see the launch of a U.S. offensive, starting with four tantalising titles on Friday, November 18.

RED president Bob Morelli comments: "Derek Oliver's Rock Candy imprint and RED are a perfect fit. Already a leader in unearthing the best in-demand out of print rock titles in Europe, the label joins RED like-minded music strategy in the U.S. As we outpace industry growth in vinyl market share, the addition of Rock Candy will help keep that trend alive and we are thrilled to have them on board."

Keep an eye and, especially, an ear out for future offerings, but for now please raise a glass and join us for a toast to the imminent arrival of the following four solid gold classics all released on Friday, November 18. These forthcoming CD titles — Sammy Hagar's "All Night Long", SALTY DOG's "Every Dog Has Its Day", NYMPHS' self-titled album and TYKETTO's "Don't Come Easy" — along with limited-edition select merch are available for pre-order now at the newly launched Rock Candy U.S. storefront.

Go to this location now for more information. 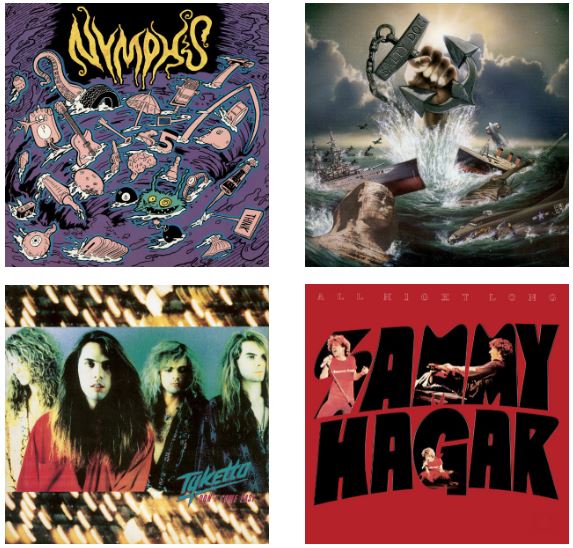