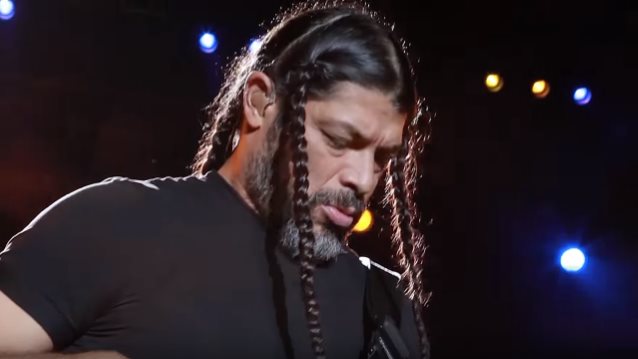 METALLICA bassist Robert Trujillo was interviewed on the July 28-30 edition of Full Metal Jackie's nationally syndicated radio show. You can now listen to the chat using the Podbean widget below.

Asked what he is most proud of about the mark he has made on METALLICA in the fourteen years he has been with the band, Trujillo said: "It's interesting, because… In fact, I was thinking about this last night. With METALLICA, my role is sort of to mediate in some ways. I feel like I've always been a great mediator, whether it was being that person in Ozzy's [Osbourne] band, or even when I was working with Jerry Cantrell [ALICE IN CHAINS] in the studio — just finding solutions and trying to keep the energy and the atmosphere positive, and making other players, other members, whatever, making their universe positive too."

He continued: "When we're trying to create or when we're learning something new or something old, oftentimes I'll kind of re-explore some of the catalog and I'll try and learn it, or relearn it, before the band actually does. I think I was jamming on 'The Call Of Ktulu' about three years before we actually played it. And 'Frayed Ends Of Sanity', that goes back about ten years or longer before we actually started playing that song, which was only like three years ago; we played it a few times on tour in Europe."

Trujillo added: "At a certain point after my first two years, which were kind of rough for me with METALLICA — just 'cause I had to learn the 'St. Anger' music, but I also had to learn over twenty years of catalog, so it was a lot going on for me at that time. And then I kind of caught up in terms of technique and my skill set and how it would work with the band. I didn't try to impose anything stylistically that maybe… With INFECTIOUS GROOVES, it's a different style of bass playing, and I wasn't trying to impose that on METALLICA; I was just trying to really hold it down. The most important thing for us right now, I believe, is the groove. This album [2016's 'Hardwired… To Self-Destruct'] grooves, the sounds are heavy, the tones… So, there's a groove thing going on with us that I think is great. Hopefully that's what I'm bringing. So, peace, harmony and groove."

Asked what would surprise METALLICA fans the most about the inner workings between him, Kirk Hammett (guitar), Lars Ulrich (drums) and James Hetfield (guitar, vocals), Robert said: "We're all very different individuals and that's… Obviously, we're brothers, we're a team, we're a family and we respect each other. But we come from different walks of life. It's incredible when you see how different we all are, especially Lars, James and Kirk. The food that we eat — everything: politics, religion; it's just all different. But at the same time, there's respect. And one thing that I can say on a creative side, which is really interesting and sometimes rare, is for as long as this band has been together, there's no shortage of creative energy. I mean, even in our what we call the jam room, the tuning room, which is where we go before we walk onstage — there's a drum set in there, obviously we have amps, and we play, and a lot of our ideas sort of come out of that room. There's just a certain magic, even recently — I start playing a bass line and James comes in [and] Lars, or someone comes up with a riff. So we're still firing on a lot of cylinders here with the creative flow and energy and ideas, and that doesn't usually carry so well as you get older; a lot of bands lose that. And we still have that fire."

He continued: "I always laugh because whenever we put the instruments on, there's just this fun energy that usually happens and people just start smiling, there's jokes. You start jamming on an IRON MAIDEN riff or something. You reconnect with your teenage youth back in the day when you were in the garage, and that's some of the magic that this band still has. And I think that's one of the main reasons why we're still around. We enjoy what we do, it's genuine, we have fun and there's also a very strong work ethic that goes with all this."

The North American leg of METALLICA's "WorldWired" trek will hit stadiums in five more cities before ending in mid-August.

The next stop on the tour is San Diego, California on August 6.