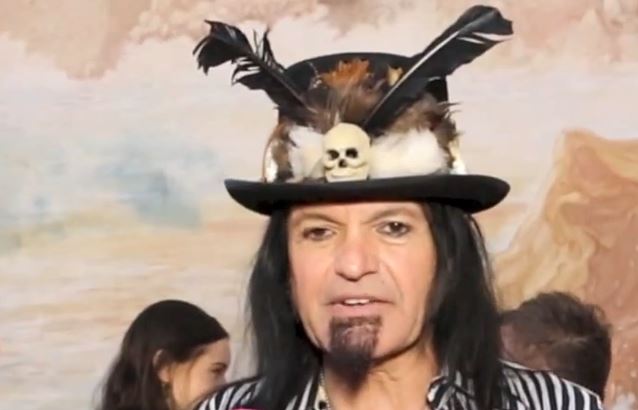 Cuban-born guitarist and composer Robert Sarzo, who spent the past couple of years performing with Geoff Tate's version of QUEENSRŸCHE, wants to make it clear that he has no involvement with Geoff's new band OPERATION: MINDCRIME which recently signed a worldwide deal with Frontiers Music Srl for the release of its forthcoming trilogy project.

"The reason that I was brought into QUEENSRŸCHE with Geoff Tate was to do the 25th anniversary of [the band's classic 1988 album] 'Operation: Mindcrime', and also to do the greatest hits and we did the farewell tour," Robert tells LARocks.tv's Redbeard in a brand new interview (see below). "And I did it — every show; I never missed one show."

According to Sarzo, the reason he is no longer playing with Geoff is simply that he fulfilled his contractual obligations with the singer.

"Nobody quit, nobody got fired," Robert said. "I was a member of that version of QUEENSRŸCHE and it ended. It was fun hanging out with Geoff and Kelly [Gray, guitar] and Randy [Gane, keyboards] and Rudy [Sarzo, bass]. And hanging out with my brother [Rudy Sarzo, who played bass for Tate's QUEENSRŸCHE] on tour. It was our first time to do a national tour [together]."

He added: "We were out for a long time. It was powerful, it was fun… Great guys to hang out with, on and off stage. It was a great experience. It was really, really positive."

Not one to remain idle for long, Robert has recruited a group of talented musicians to perform concerts saluting the illustrious career of Mexican-American guitarist Carlos Santana. Sarzo was one of those aspiring young guitarists who drew inspiration from Santana's achievements. It seems only fitting, then, that after experiencing a highly successful career of his own, Robert Sarzo has chosen to salute Santana, the man who helped set him upon his path as a musician decades ago, and to express his deep gratitude to Carlos Santana for being an inspiration not only to himself, but to so many Latino musicians who followed in the footsteps of this ground-breaking legend.

Robert says about his new project: "It's not a tribute, we're not dressing up like Carlos Santana, but it's a salute because… you see, I came to America at six… I turned six [years old] a month after I arrived here from Cuba. We were refugees. We just left everything… the lights on in the house… we just walked away. And when we came to America, which we are really happy that we got accepted and helped out to start a whole new, fresh lifestyle, and especially the freedom to evacuate communism. But not knowing the language, it was pretty difficult; it was difficult in school. When rock and roll was introduced to me through THE BEATLES, it was a way of showing freedom to play rock music…"

He continued: "You've gotta remember, in school, your teacher… I was in kindergarten while your teacher is asking you to pray to God for ice cream. And it's really hot out. So, like, 'Oh, okay.' What was I? Five years old? So you pray to God for ice cream, and then there's no ice cream. So the next thing is, 'Hey, let's pray to Fidel Castro for ice cream.' And there's ice cream bells, and they're handing you ice cream. So we were being brainwashed at a very early age; that was the whole regime of communism. So rock and roll is the total opposite. It's freedom, thinking outside the box, it's dreaming and feeling emotions that you are free. And that's what America is about. And when Carlos came into the scene after Woodstock, he brught that magic of being Latino and being proud and being accepted as being a guitarist, and that's what I always wanted to do."

Robert added: "Music called me; it wasn't something that I really [said], 'Hey, I wanna do that.' I did enjoy seeing THE BEATLES, what they were doing. But as soon as I heard music, and there was an instrument in my house, a guitar, I picked it up, and it just felt natural to play the instrument. So that's why I'm doing the salute — to thank Carlos Santana for helping not just me but all the other Latinos to be able to make a living playing rock and roll."

Robert recently released his long-awaited solo album "After The Storm". The CD includes songs performed both in English and Spanish versions, and opens with an instrumental piece, "War Dance", inspired by tribal rhythms, Afro Cuban. "After the Storm" spent several weeks in the Number One position on Amazon's Latin Rock best sellers list.