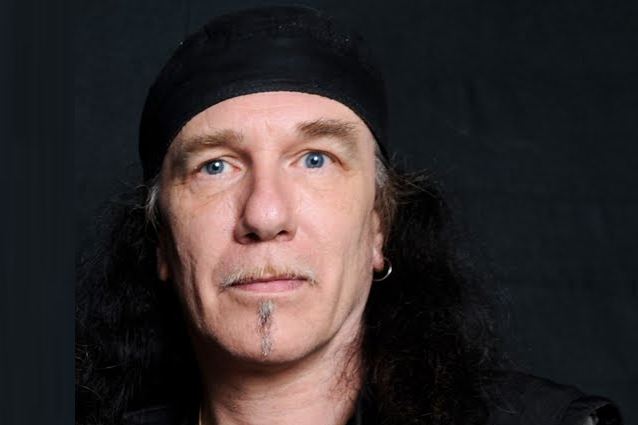 Planet Mosh TV recently conducted an interview with drummer Robb Reiner of Canadian metal legends ANVIL. You can watch the chat below. A few excerpts follow (transcribed by BLABBERMOUTH.NET).

Robb: "Yeah, it was the first time in 20-odd years that the four original boys were hanging out at the same time. It was great. Dave got on the Internet recently. He discovered smart phones and all of this stuff, so he got on Facebook so he's been following ANVIL. Next thing you know, he wanted to come and see the band. In that process, we phoned up Ian and told him, 'Hey, man, why don't you come and hang out with us since Dave is coming out?' We didn't jam onstage. They came onstage and sang 'Metal On Metal'. It was a good time. Dave's been out of the business since back whenever… like 1984. He's been out of it since then. Ian, he plays weekends in some band, like a hobby. That's about all I know. We were talking about doing this '1-2-3' tour where we'd have the original guys and do all of the stuff from the first three albums. It's a good idea to do it for the fans where we play five songs from each album. We still might do it. The original guys… I don't know. I don't know if Dave is ever going to be up to it as a musician. I don't know if he's got it. He's not in game shape."

On if ANVIL will ever do a new live album:

Robb: "We think about it all the time. We need the right opportunity, like at a Bang Your Head!!! festival where they could record the whole set professionally. We just haven't had the right opportunity to go through with it. I'd love to make a live DVD where you have 12 cameras. But I want to make sure it captures everything we're doing. Right now we're not planning on it. We already got six new songs for the next album. We're going to be recording a new album next year some time."

On if the band writes while touring:

Robb: "No, we got our own studio. This past summer, we took the summer to write these songs. We said, 'Okay, let's get some new material together.' We were just playing weekends in Canada, then spent the rest of the time writing leading up to coming to the U.K. When this is done, we're going to go back, pick up, and keep writing. We have half an album written already. We're just tossing around titles. It's great. It's ANVIL. It's new stuff, but it's ANVIL."

On if ANVIL has working titles for their new album:

Robb: "There's many. We're looking at: 'Anvil: Something To Say'. That one has been attractive to us lately. We don't have a title, but we have many that we could go with. As we write a few more songs and Lips [Steve Kudlow, vocals/guitars] will start creating a few lyrics here and there and something will come up. Many do stick. I like 'Distinctive By Design'. That's a good one, too. I really want to go simple. I want the next cover to be nothing. Just an anvil. That would be the best. We've never done that. We'll think of a title."

On why every ANVIL album title has three words:

Robb: "It started out innocently with 'Hard 'N' Heavy', then 'Metal On Metal', then 'Forged In Fire'. I think around then, we said, 'We're doing this alliteration thing. Maybe we'll just keep going with it.' Then we came out with 'Strength Of Steel', 'Pound For Pound', 'Worth The Weight'. We just kept going and now it's terminal. It just goes on. There's no real reason. It's become our thing, hasn't it? Every cover has an anvil on it. Whatever it's doing, there's just an anvil somewhere. It's become what we are. If we were to take that away, people would go 'What the fuck? Are you running out of ideas?'"

On why ANVIL isn't afraid to do smaller gigs:

Robb: "We'll play anywhere. In the U.K., we've been coming over more frequently and we're trying to come more often. It's been paying off for us because we're reaching more people all the time. The agents say, 'There's so many little towns in England who want to see you guys. Would you want to go there?' So we said, 'We'll go anywhere.' People go, 'What's a band like you coming here for?' Well, the place is packed. It's worth it to me. The fans came; they came from all over. We're going to do this and see the outcome at the end. The agent was feeling that it was going to be good, and so far, we're doing good. There's fans here. I guess our movie ['Anvil! The Story Of Anvil'] played well in England. It reached further than the metal underground flyer thing. Lips and me were walking around London for a week and people were noticing us, like lawyers and stock brokers. It's everywhere. Like, 'Man, I love you guys. What's happening? I hope you're doing good.' They know us from the movie. It was endless. The movie paid off."

ANVIL is continuing to tour in support of its latest album, "Anvil Is Anvil", which came out on February 26 worldwide (excluding Japan) via SPV/Steamhammer.

Reunion of the year? Of the century? For the first time in 27 YEARS the original 4 are hanging together!! ANVIL !! pic.twitter.com/mWACORoOWa