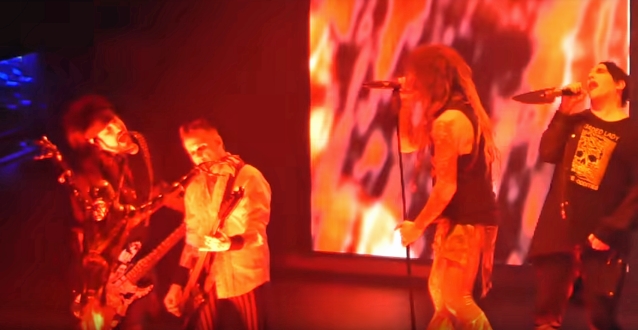 Rob Zombie was joined by Marilyn Manson and MÖTLEY CRÜE bassist Nikki Sixx for a performance of THE BEATLES classic "Helter Skelter" during last night's (December 31) Ozzfest, which took place at the Forum in Los Angeles, California. Fan-filmed video footage of their appearance can be seen below.

This past July, Manson and Zombie released a studio version of their cover of "Helter Skelter", which Zombie described to Rolling Stone as "heavier, weirder and more groove-oriented." MÖTLEY CRÜE covered the song on 1983's "Shout At The Devil" album, and also released it as a picture disc, the jacket of which pays gruesome homage to the track's later Charles Manson murder connections.

Asked how the idea for him and Manson to cover "Helter Skelter" came about, Rob told Rolling Stone: "We had been talking about doing something together for these shows — that he should come onstage during my set and we'd do a song. But we couldn't think of what song. After we talked, later that night I was home and I just thought the obvious song is 'Helter Skelter'… It's so obvious that neither one of us thought of it! And then I figured, 'Well, rather than us just doing it onstage, why don't we take it one step further and record it and put a new spin on it?' That way, rather than just doing some impromptu jam together, now the fans will go, 'Oh, there's the song I've already heard, and now they're doing it."

Regarding how they approached the song in the studio, Rob said: "Well, my thought when it comes to covers is to stick close to the original. Because in my mind, what's the actual point of doing a cover if no one can recognize it? So with our version, I think it varies as much as it can from the original, but not so much that it becomes a different song."