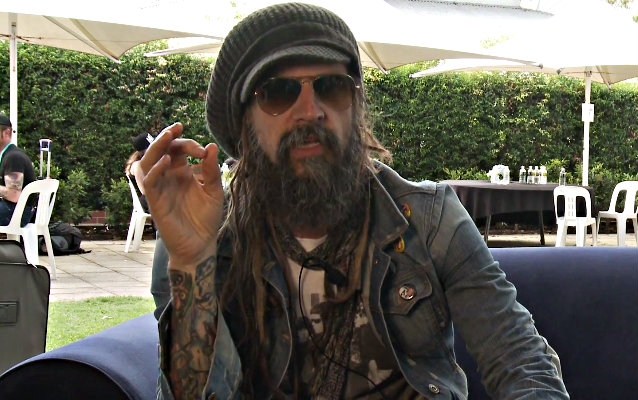 Rob Zombie has told TeamRock Radio that it would be impossible to stage a festival like U.K.'s Download in the U.S. because the American rock scene has never regained its momentum after the rise of the early '90s grunge movement, which symbolized the working-class spirit and focused on music over image. He said (hear audio below): "In the '90s, when the grunge rock thing hit, with NIRVANA and all that, everybody thought it was cool to be anti-rock star. But in a way they sort of anti-rock starred themselves right out the door, because the rap guys came in and they said, 'Fuck it. We'll be the rock stars then, if you guys are going to wear flannel shirts and stare at your feet.' And in the U.S., truthfully, rock music has never recovered from that. A whole generation of kids thought, 'Fuck this! Rock music is boring. Let's go listen to rap music.' And it's never recovered. I mean, over [in the U.K.] it's different. You could never throw a festival like [Download] in the U.S. and get this many people, with just rock music. Never."

Asked by On Tour Monthly in a November 2013 interview if it's worth it for him to constantly bring out lavish stage productions, Rob said: "Yes and no. For some bands, it's a hard line to follow. In one sense, you are generating huge sums of money while you're on the road. But here's the thing. Say a tour generates $4 million dollars, but it cost you $3,999,999 to stage it."

He added: "I can tell you that I put a lot of thought into my stage shows before taking them out on the road. The general public has absolutely no idea how much money is involved to actually take tours on the road. The more elaborate the production, the higher the cost."

Asked if that's his own fault, Rob said: "It is and it isn't. It's really the fault of the whole industry. When kids go to a big rock show, they expect a big rock show. If they go to see Jewel, they expect to see her with an acoustic guitar and a spotlight. If I did that, kids would scream, 'What they hell is this?'

"In a sense, you could say I created my own hell, but it's kind of the nature of this business. It's the same thing with a movie star who's known for action movies. You can't make a decent action movie unless you spend at least $150 to 200 million filming it.

"People come to expect certain things at my shows, and it those things are expensive to take on the road. If they are not there, the audience is going to be bummed and might not come back. I'm not complaining boo-hoo about the money. It's just the nature of it all. It's expensive to take out a tour with all the production involved. There are crews, buses, hotels and other considerations that go into these shows night after night. Hell, even rock videos started getting insane with the prices directors wanted to charge. It's hard to get them made for cheap anymore .They are extremely overpriced, and it's hard to make them nowadays, even harder to get them played. Unfortunately, you still need them into today's business world."