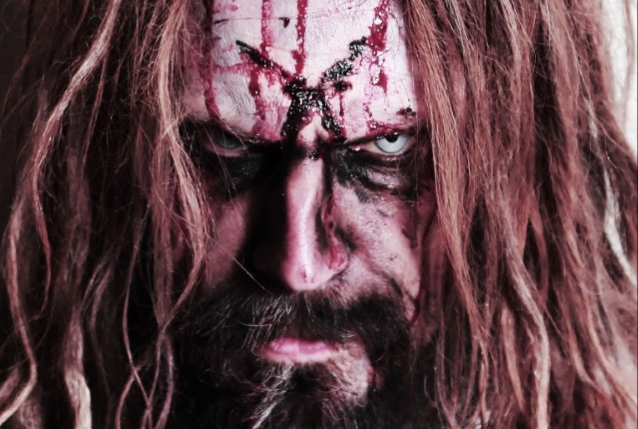 Rob Zombie spoke to "Whiplash", the KLOS radio show hosted by Full Metal Jackie, about his forthcoming studio album, which will arrive in 2019 via his new record label, Nuclear Blast Records. Asked how working with an independent company this time around will make it better for him to make his music available to his fans, Rob said (hear audio below): "It's all the same to me. Ever since day one, I've just made records however I wanna make 'em. So it's all the same. It was never like the major labels told you what to do or anything like that. Maybe for some people that was their experience, but right from the get-go, when I signed to Geffen Records back in the early '90s with WHITE ZOMBIE, they didn't know what to make of us, so they certainly never weighed in with any sort of suggestions on what we should do. So it's all the same to me. I do whatever I want. I've never had anyone tell me what to do. If I've done something that people think sucks, that's been my fault — not anyone else's. I do what I want."

Zombie also talked about the evolution of his songwriting process, particularly as it relates to the upcoming follow-up to his 2016 studio album, "The Electric Warlock Acid Witch Satanic Orgy Celebration Dispenser", and 2018's "Astro-Creep: 2000 Live". "It always changes," he said. "You go through phases. Usually, when you first start a band, you're so green — it should seem obvious how to write a song, but it's not. So you do lots of weird stuff. Then you tend to write songs that are way too long — I think. A lot of bands get into, 'Every song is 'Bohemian Rhapsody',' 'cause you just don't know how to edit yourself. Then I got really into trying to write short, concise songs, 'cause you understand the power of that. But with this record, we really wanted to get into… The songs aren't even super-long, but they're much more complicated structurally — a lot more parts, a lot more changes — and it was really just a trick of trying to figure out how to make these sometimes unrelated grooves and pieces of music fit together. And that was really the challenge we tried to do this time."

According to Rob, his goal on his next album has once again been to explore new territory without deviating too much from his tried-and-tested formula.

"Whenever we start making a record, we don't work in a sense where we go into a rehearsal space and jam and come up with riffs — we don't function like that," he said. "When I start, day one of recording, there's no music that exists — we just record as we create. And after all these years, you kind of are just trying to find new things to do. Because there's a certain formula you have, or you could have, that it would take about two seconds to write 'that' type of song. But you always wanna try to figure out new avenues that you can explore. And that's really what it is. 'Cause you've gotta keep yourself excited. You never wanna give the audience what they expect, because that's boring — they get bored. They may think they want that, but then they just don't wanna get bored and go, 'Ah, yeah, same old crap, just like we thought.'"

This past February, John 5 compared the shock rocker's upcoming album to THE BEATLES' groundbreaking LP "Sgt. Pepper's Lonely Hearts Club Band", saying that it is "by far the best Zombie record that he's ever done." He added: "A lot of people say, 'Oh, it's just our greatest record,' and I don't say that. Whatever I say is so honest when I'm doing interviews. So I think it's our best record."

Zombie recently told Loudwire about his upcoming album: "I think it's the best record we've made. Parts of it are the heaviest, parts are the weirdest, it's the most complex record we've ever made, but at the same time, it's always very catchy and listenable, but it's the most intricately structured record."

He added: "There are those songs that go in a direction we've never even gone near before. Personally, I like records that are very varied in sound. Not just like, 'Oh, here's 12 super heavy tracks,’ and they're all the same tempo. I like records that are all over the place. That's why I think my favourite BEATLES record was always The White Album."

Rob Zombie has continuously challenged audiences as he stretches the boundaries of both music and film. He has sold more than 23 million albums worldwide, and is the only artist to experience unprecedented success in both music and film as the writer/director of seven feature films with a worldwide gross totaling more than $150 million.