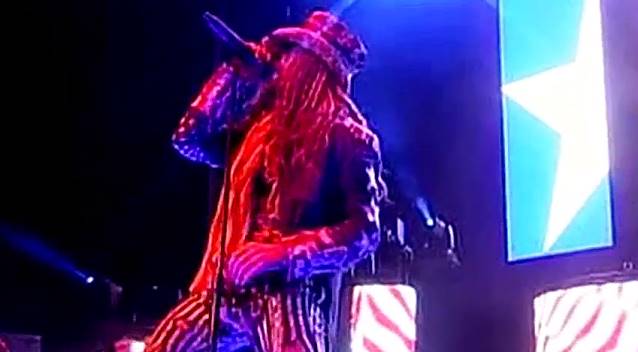 The official video for Rob Zombie's cover version of GRAND FUNK RAILROAD's classic "We're An American Band" can be seen below.

Asked how they decided to cover "We're An American Band" for Zombie's latest album, "Venomous Rat Generation Vendor", Zombie guitarist John 5 told Live-Metal.net: "We were thinking about covers, and I can picture me and Rob talking about this. I was like, 'Yeah, what if we did this one or this one?' We were going back and forth for a little while, and Rob goes, 'Man, 'We're an American band.' And I was like, 'That's it. We have to do it, we have to do it.' And a cool part of that song is, in the original, there's a lyric that goes, 'Up all night with Freddie King, poker is his thing;' in the Rob Zombie version, it says, 'Up all night with Kerry King.' We kind of snuck that in, so the next time you listen to it, listen for Kerry King's name."

Rob Zombie will guest on the Halloween (Thursday, October 31) edition of "Jimmy Kimmel Live!" Watch as "Jimmy Kimmel Live!" celebrates the spooky holiday in costume with the show's "Half & Half Halloween Pageant", guest Ray Romano and a musical performance from Rob Zombie. Rob and his band will perform two songs on the show's outdoor stage in front of a standing-room-only crowd.

Each year, Jimmy has dressed up as a different character — Donkey Kong, Big Bird, Thor, Count Chocula, an oversized version of himself, a ghost, and he has even hosted the show just as his severed head. Tune in to find out what Jimmy Kimmel will dress up as this year.

Zombie will next co-headline the "Night Of The Living Dreads" tour with KORN. The 17-date run begins on November 3 in Reno, Nevada and wraps on November 26 in Bethlehem, Pennsylvania.

His "Great American Nightmare" Halloween music and horror event opened on October 10. The event is being held every Thursday, Friday, Saturday and Sunday through November 2 at FEARPlex in Pomona, California with 15 nights of music, culminating with a November 2 headlining performance by Zombie himself.

The centerpiece is one of the most advanced haunted house attractions in the world, with three separate areas each named after a film directed by Zombie.