The cover artwork of ROB ZOMBIE/ex-MARILYN MANSON guitarist John 5's upcoming remix CD "Remixploitation", which was designed by Matt "Piggy D" Montgomery (ROB ZOMBIE), can be viewed below. The CD is due out later this year. More information will be made available soon.

John 5 has just released the IMV "Behind the Player" DVD in which he gives an intimate behind-the scenes look at his life as a professional musician, including rare photos and video footage. John 5 then gives in-depth lessons for how to play "Let it All Bleed Out" and "Lords of Salem" by ROB ZOMBIE on guitar and jams the tracks with ROB ZOMBIE drummer Tommy Clufetos.

John 5 released his fourth solo album, "Requiem", on June 3 via 60 Cycle Hum. John 5 performs all instruments with the exception of the time-keeping by Zombie bandmate Tommy Clufetos (drums). The album was recorded in the middle of night that lent a cool vibe and only time John 5 had studio times. Most of the songs are 12-13 minutes long so John 5 decided to put in markers to divide them up so when songs change from track to track it seems to meld in to each other. 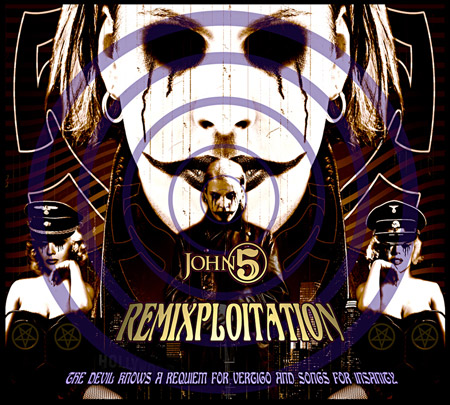