Detroit basher Tommy Clufetos has played drums for TED NUGENT, ALICE COOPER and currently ROB ZOMBIE. His crushing technique and hard-hitting style have made him one of the heaviest hitter in the arena.

In his IMV "Behind the Player" DVD, Clufetos gives an intimate behind-the scenes look at his life as a professional musician, including rare photos and video footage. Clufetos then gives in-depth lessons for how to play "Lords of Salem" and "American Witch" by ROB ZOMBIE on drums and jams the tracks with ROB ZOMBIE guitarist John 5 and OZZY OSBOURNE bassist Blasko.

"Video Tab" shows exactly how Clufetos plays the two tracks. The video-game-style animated tablature is similar to Guitar Hero, but shows how to play the tracks for real.

Get your copy at Guitar Center or www.IMVdvd.com on November 1, 2008.

The producers of the IMV series donate $.25 from the sale of each DVD to Little Kids Rock, an organization that gets instruments in the hands of underprivileged kids.

A trailer for Clufetos' IMV "Behind the Player" DVD can be viewed below. 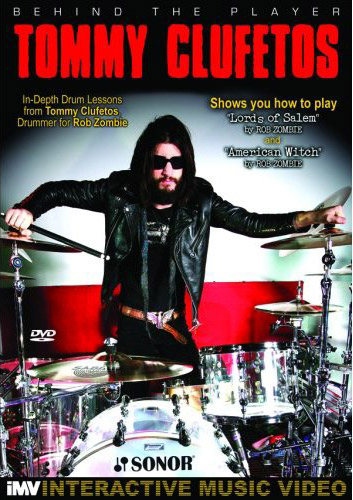