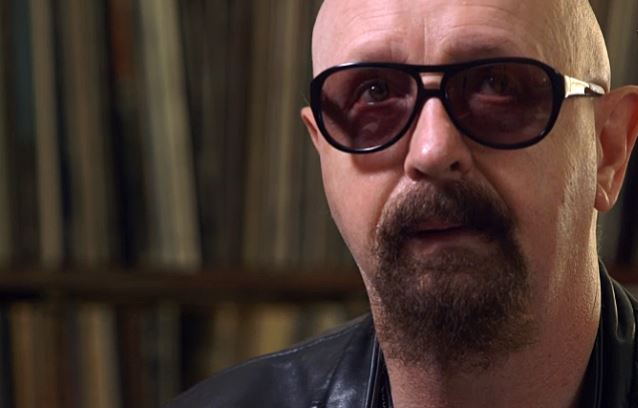 During the latest episode of VH1 Classic's "Rock Icons", an original documentary series profiling the most legendary artists in the history of rock music, JUDAS PRIEST singer Rob Halford got very emotional while recalling speaking to a "huge PRIEST fan" who was dying of cancer. He said: "You'll hear many, many, many stories of how metal music has helped people through difficulties in life." He continued: "I don't know whether this is the right time to say this — we may have to cut this out — but just recently I was contacted by someone to speak to somebody that was about to pass from cancer. [Long pause and deep sigh] So I was able to speak to him, and he was really, really weak… [pause] but he was saying that he was a huge PRIEST fan and that that side of his life was so important to him, that metal was a really, really important way that he got through this horrible cancer that was eating him away."

After the Halford "Rock Icons" episode aired last weekend, Eddie Trunk, who co-hosts VH1 Classic's "That Metal Show", revealed in an online posting that he was "the one who asked [Rob]" to place the call to the dying fan. Trunk explained: "This happened about a year ago and I never said anything about it simply because I didn't know if Rob wanted people to know he did it and I didn't want to start a trend of always calling on friends like Rob for favors."

He continued: "I was asked by a friend who works at SiriusXM if I would reach out to Rob. It was his best friend who was a huge PRIEST fan and sadly had days to live. A call from Halford was something he could have only dreamed about.

"The story was very moving and I reached out to Rob and told him about it. I didn't want to put him on the spot and knew how incredibly difficult it would be for him to call someone he didn't know at all who was dying, so I didn't pressure at all and just told him the story. Rob said to me to set a date and time and to send him the number and he would call. Sure enough, at the appointed day and time, Rob called this man in the hospital and had a nice chat with him.

"I was not there and I didn't know the man who was ill. It was his best friend Steve who I knew and who contacted me. Steve called me shortly after, thanking me for setting it up and blown away by Rob doing it and what it meant to his friend.

"Sadly [his friend] lost his battle with cancer a few days later. But, needless to say, it was an incredibly powerful moment for all.

"When Rob talked about it in the 'Icons' show, you could see how moving it was for him as well."

He continued: "I was surprised and pleased he revealed he did this. Why? So many artists go on about how much they love their fans, and many truly do. But so few would go the extra mile of calling a complete stranger at an incredibly tough time to help lift their spirits for a few minutes. That is Rob Halford. Rob reminds me a lot of our mutual late friend Ronnie James Dio in that way. Always will going the extra mile for their fans and truly truly appreciating them.

"Needless to say, shortly after the show aired Saturday, my friend Steve contacted me again. He was watching and saw the emotion in Rob's face when he mentioned it in the show. It caught everyone off guard who was in on making it happen and all were grateful Rob did it."

Trunk added: "I only relay this all to you because it is important to acknowledge the total class act Halford is. Having him as a friend for a very long time, I always knew this. But in a day and age where all most media seems to do is want to pounce on people or celebrate the train wrecks, I think it is cool to hear stories like this and give credit where credit is due to not only phenomenal talents in our genre of music, but equally awesome human beings."