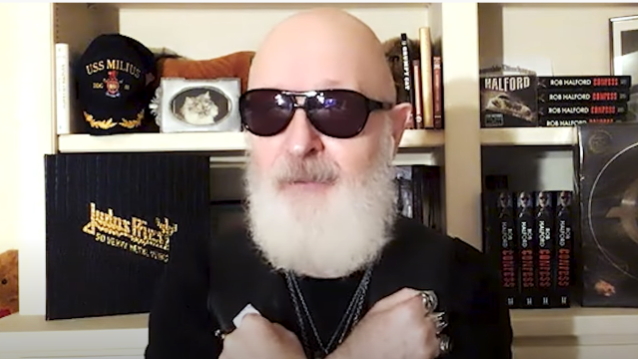 In a new interview with Brazil's Kazagastão, JUDAS PRIEST singer Rob Halford was asked what he has lined up for the coming months as the pandemic slowly subsides. He responded (as transcribed by BLABBERMOUTH.NET): "Now the world is opening up, and we need to get back on the road. Because, God, we are so missing our fans. We miss seeing our fans. We miss seeing each other [in person]. We haven't seen each other for over a year. We do a lot of Zooms [video chats], but we haven't seen each other forever. So we can't wait to be a band together and start rehearsing and so forth and get ready for some shows.

"We've got a bunch of great new ideas for [PRIEST] tracks, lots of really strong demos," he continued. "It's gonna be a very potent record, 'cause we know we have to follow [2018's] 'Firepower'. But I've gotta tell you, 'Firepower' turned the metal up for all of us in the band; it really gave us a tremendous boost this far on. And so, as a result of that, we carried all the energy from 'Firepower', we carried all the energy from the shows, and we took that with us when we went into the writing sessions last March — not this March, but last March — and you can sense it in the writing. So we already have some extremely potent, strong material.

"So, the next, what? I would say at least the next three to five years, it's PRIEST, PRIEST, PRIEST," Rob added. "It's gonna be another really special, important moment for PRIEST. So that's on the way in the not-too-distant metal future."

JUDAS PRIEST's European tour, which was scheduled to kick off in late May, was recently once again postponed due to "ongoing COVID-19 vaccine issues." The trek will now run from May 27, 2022 in Moscow, Russia until July 31, 2022 in Oberhausen, Germany.

In November, Halford addressed the COVID-19 crisis in an interview with Canada's iHeart Radio. He said: "We're gonna have to learn to live with this thing. It's like the flu. And this vaccine is just one tool in the way of recovery. But the facts are, believe the scientists, 'cause they are the experts. This is what they do. They are committed to making lives better for people. And the prognosis is that everything should be secure enough for us all to start going out again.

"Whoever made this choice or decision [to push back the PRIEST tour], I think they made the right move, because I think it's gonna be very tricky for bands to try and go out on January the 1st of 2021," he continued. "I think by the summer, everything will be settled, and hopefully the vaccine will have been administered to hundreds of millions of people. I think we'll still have to go through some protocol, which is a small price to pay — getting the temperature done and maybe wear a mask. It doesn't matter. We'll be back with each other again."

The U.S. leg of PRIEST's "50 Heavy Metal Years" tour is still due to launch September 11 in Orlando, Florida and wrap up on October 30 in Mashantucket, Connecticut.