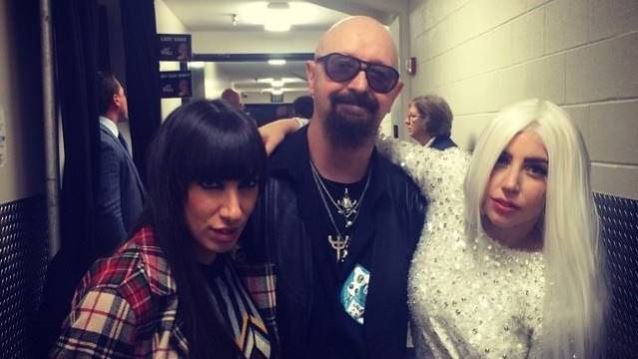 On June 22, Scot Fox of the 97.9 WCPR Rocks radio station conducted an interview with JUDAS PRIEST singer Rob Halford. You can now listen to the chat using the SoundCloud widget below.

Asked about his rumored collaboration with one of his current favorite artists, pop superstar Lady Gaga, Halford said: "I was in a hotel in London the other day and Gaga was, like, two floors above me. Needless to say, security was really, really tight. We didn't really get to see each other again that day, 'cause she was super busy. But let me tell you: that lady is a heavy metal maniac. She loves PRIEST, she loves [IRON] MAIDEN, she loves MOTÖRHEAD — all of these kinds of heavy metal bands that have been roaring on throughout the decades; she's a big fan of all [of them]."

He continued: "When I met her, I think it was last year in San Diego, where I'm hanging out these days, we immediately bonded. She's just this wonderfully talented lady with a spectacular voice.

"You know, you have to cut through a lot of the visual stuff with Gaga and then get to what her voice is about. For me, as a singer, as a fellow singer, she's absolutely sensational and I would love at some point to do something with her. I don't know if ever that's gonna happen, but it's on my bucket list. I think we've all got a bucket list, and that's on mine."

Halford first Lady Gaga in June 2014 after her show in San Diego. He attended the concert with Lady Starlight, Gaga's longtime friend and collaborator who supported JUDAS PRIEST on tour in 2011.

Back in May, Halford revealed to Yahoo! Music that during one of the London gigs on JUDAS PRIEST's "Epitaph" tour, Gaga was planning to appear as a special guest. "Gaga called and said, 'Can I get on the back of Rob's bike when he comes out and we'll do 'Hell Bent For Leather'?" he said. "I was like, 'Oh my God! Diva moment. Please let this happen!' But she couldn't do it. She ended up doing a shoot in Omaha, Nebraska, that took a week." He added: "If that isn't a nice affirmation that someone with extraordinary talent that isn't metal can still gravitate to the metal experience, I don't know what is."

Lady Gaga previously spoke about her love for IRON MAIDEN and BLACK SABBATH, calling the experience of seeing MAIDEN for the first time a "life-changing" event. The singer also appeared in photos with Rock And Roll Hall Of Fame inductee Alice Cooper and ANTHRAX drummer Charlie Benante.