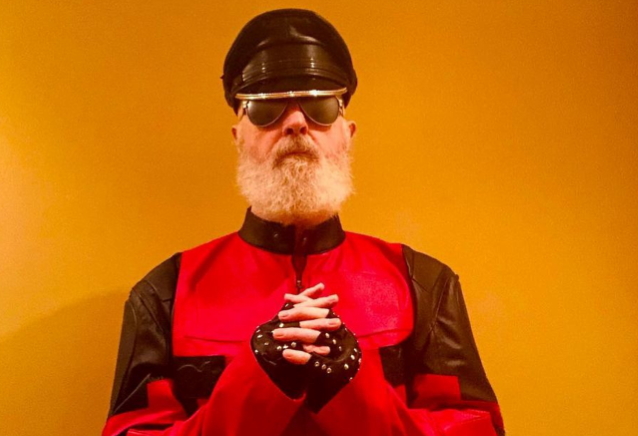 In a brand new interview with France's Heavy1, Rob Halford spoke about his decision to leave JUDAS PRIEST in 1992 before going on to record and tour with the aggressive metal group FIGHT and the industrial project 2WO before his return to traditional metal with the eponymous band HALFORD in 2000 and eventual PRIEST comeback in 2003. Asked if it was important for him to explain his side of the story in his autobiography, "Confess", which came out last year, Halford said (as transcribed by BLABBERMOUTH.NET): "I think it's important, yes. There are lots of unauthorized books about PRIEST, and they're all made up of little tidbits of gossip and information or rehashed interviews from other magazines. If you want the truth, you go to the source.

"Never in a million years would I ever have wanted to leave — formally leave, go away — from JUDAS PRIEST," he continued. "It was genuinely a communication breakdown.

"Artists, musicians, we're super-sensitive people. My God, the smallest thing can make us [react negatively]. Me, diva — the diva Metal God. And that's just kicked back artistic sensitive emotional instinct. So I thought here was an opportunity just to try and explain what really did happen. And it just seems crazy that 10 years had to pass. But as I say in the book, some of that was not coming from me; it was coming from different places. And so just to set the record straight, I think, was important."

Rob previously spoke about his exit from PRIEST during a September 2020 interview with Chris Warburton of BBC Sounds. At the time, he said: "I was in a different place there professionally, especially associated with some of the business connections that I had at the time.

"We finished that glorious 'Painkiller' world tour, which was a real slog," he continued. "All of these tours that we do, they're incredibly long and tiring, but we do it because we love to do it; we love to see our fans around the world. But prior to this 'Painkiller' tour, we'd gone through that really, really difficult time with the Reno trial" — referring the infamous 1990 trial in which PRIEST was accused of inserting subliminal messages into its music — "so we had that kind of filtering behind us in the background as we forged ahead with this incredible 'Painkiller' record and tour.

"Hindsight, call it what you will, we should have said, or I should have said, at the end of that 'Painkiller' tour, 'Guys, I'm gonna go off for a couple of years and just chill and maybe do some stuff.' But that's not the way it turned out. We just fell into this terrible miscommunication. Bands are like families — you fall out in your family. It took about 10 years for us to repair that, particularly on my part. But there you go. At least I was able to get out of my system the things that I was searching for as a musician. I had my great times with the FIGHT band, the 2WO project, the HALFORD project. It all led me back to the place where I was destined to be as a musician, which is to be with JUDAS PRIEST."

The 2WO project issued the much-maligned "Voyeurs" album in 1998 via Trent Reznor's Nothing Records label and sold poorly before Halford returned to his roots and formed the aforementioned HALFORD.

Although Reznor is given "executive producer" credit for the "Voyeurs" disc, the project is largely the work of Halford and co-writers John 5 and Bob Marlette.

Halford's autobiography, "Confess", was released via Hachette Books. The book was described by the U.K.'s The Telegraph as "one of the most candid and surprising memoirs" of last year.