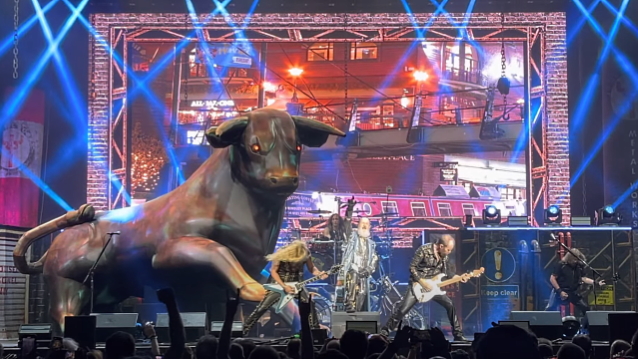 JUDAS PRIEST's first pandemic-era tour, the rescheduled "50 Heavy Metal Years" North American trek, kicked off on September 8 in Reading, Pennsylvania and will conclude on November 5 in Hamilton, Ontario, Canada. Asked in a new interview with LifeMinute what fans can expect to see at each concert on the tour, PRIEST singer Rob Halford said (as transcribed by BLABBERMOUTH.NET): "Well, this is unique. JUDAS PRIEST became famous not only for our music but for the show, the spectacle that we've been putting on for decades… We give you an indelible metal memory, so when you've seen or witnessed a JUDAS PRIEST show, that lives in your heart and your mind forever. So this is an opportunity for us to really do those things but on a new dimension. We've created this really cool set — it's like a factory.

"When I was a kid, when we were kids growing up in the Midlands [part of the U.K.], we were surrounded by heavy industry, the steel mills, the iron factories and everything like that," he continued. "So we're kind of taking you into what we call the JUDAS PRIEST metal works, where the metal is made. And so that's what we surround ourselves with. We have a spectacular lighting show that we've always put an emphasis on, great things happening on the video screens, what we wear… And a couple of crazy things, like this gigantic, huge, inflatable bull that is half the size of the stage, because where we're from in Birmingham, it's famous for this bullring, as it was called. And the bulls that used to be sold there as part of trade and commerce and so forth, they're kind of synonymous with that. So we've got this thing happening at the end of the show, and people [are, like,] 'Oh my God! Is that real?'

"It's just a great, great night out and a celebration of everything that you know and love JUDAS PRIEST," Halford added. "But the music leads the way. We've always said that you can't build all these things around songs that don't match it. So we've done that — we've done that over and over again. So we have a great setlist, a really cool setlist. It's like a time machine. We're taking you with us through as far back as we can go, our very first album, 'Rocka Rolla'; we brought that song back to the stage for the first time. So there are some surprises musically as well as everything else.

Bassist Ian Hill is the sole remaining original member of PRIEST, which formed in 1969. Halford joined the group in 1973 and guitarist Glenn Tipton signed on in 1974. Rob left PRIEST in the early 1990s to form his own band, then returned to PRIEST in 2003. Founding guitarist K.K. Downing parted ways with the band in 2011, and was replaced by Richie Faulkner.

On October 15, JUDAS PRIEST will release "50 Heavy Metal Years Of Music", a mammoth limited-edition box set which will include every official live and studio album to date plus 13 unreleased discs. This is the most extensive release of previously unreleased music the band has made from its vast archives. Restored and mixed by Tom Allom at La Cucina W8 and mastered by Alex Wharton at Abbey Road Studios, this special release will be made available via Sony Music.