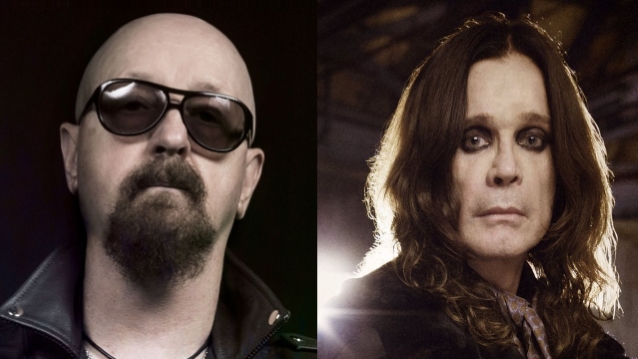 The legendary British heavy metal band was scheduled to tour Europe with the BLACK SABBATH frontman before Ozzy canceled the trek when he was admitted to the hospital due to complications from the flu.

Asked by Australia's Heavy if Ozzy's latest health scare makes him question his own mortality, the 67-year-old Halford said (hear audio below): "We love Ozzy to death. Oh my God! When you say 'Ozzy,' your head is full of this remarkable man's career and all the wonderful things he's done for rock and roll, for metal. He's touched so many millions of people's lives, and we're really, really happy that he's recovering.

"It's gonna be fantastic — isn't it? — when we're all together again," Rob continued.

"Life is life. And you do what you can to deal with the adversity that puts itself in your path. We're going through that with Glenn [Tipton, JUDAS PRIEST guitarist]. Let me just rephrase that — Glenn's going through that himself with his great battle against Parkinson's [disease] that he's dealing with. And he's a wonderful example — a really, really strong, powerful example — of somebody that's fighting back and pushing back and still living an active life with this challenge.

"Glenn comes out and joins us when he can. He's still an active, full member of JUDAS PRIEST. If he's not able to make [the upcoming] Download [festival appearances in Australia], he's with us in spirit, in the songs that he's written, and he's up on the big screen.

"So, yeah, it is what it is. We're all getting on. But we're absolutely determined to keep going and live our lives in metal and share it with our fans."

Ozzy's wife Sharon first broke the news of his hospitalization on February 6. Since then, she and son Jack Osbourne have kept a close eye on the singer, with his condition improving with every passing day.

Listen to "Bringing the Firepower with JUDAS PRIEST" on Spreaker.