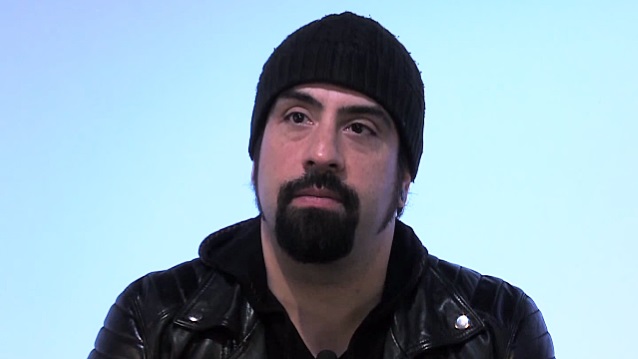 Steven Rosen of Ultimate-Guitar.com recently conducted an interview with former ANTHRAX and current VOLBEAT guitarist Rob Caggiano. A couple of excerpts from the chat follow below.

Ultimate-Guitar.com: After you finished [ANTHRAX's] "Worship Music" [album], you left the band. Why?

Caggiano: At that point when I decided to leave those guys, I just felt like I needed a change. The thing is the band was doing amazing. ANTHRAX was on top of their game. We had just come off the "Big Four" tour and all this awesome stuff happened. But the bottom line was I just wasn't happy and my heart wasn't in it.

Caggiano: The main thing was it was never a creative outlet for me. That's something I'd been thinking about for a while — for years. It didn't happen overnight. I know to the public and to the fans it seemed like, "Wow, this came out of left field" but it really didn't. I'd been talking to those guys and I had many conversations with them over the years so the were definitely not surprised when it went down at all. Yeah, it's just something I needed to do for my own sanity.

Ultimate-Guitar.com: If you're not happy, it doesn't matter how successful you are.

Caggiano: I love the ANTHRAX guys; they're like my second family. I think they get it and they totally understand why I needed to do that. We're still cool and we still hang out and every time I see them, it's totally cool. I was just with Scott [Ian, guitar] and Frankie [Bello, bass], actually, the other night here in New York. Yeah, everything's all good.

Ultimate-Guitar.com: When you talk about ANTHRAX not being a creative outlet for you, are you talking about not being a part of the songwriting process?

Caggiano: Yeah, exactly. In ANTHRAX my role was, "You're playing the solo." [laughs] It's like, "Alright, cool." Don't get me wrong, I love playing solos. It's what I do. I'm a lead guitar player. But there's definitely so much more I can do and I had way more to say musically than what I was doing with ANTHRAX. That's basically it.

Ultimate-Guitar.com: Did you actually bring in song ideas that didn't get listened to?

Caggiano: It would never even get to that point. It's cool. That's their thing. They have a system and they have a way of working and they've been doing it like for ages. I totally respected that but after a while it just got to the point where I felt like I was going through the motions. I'm not the kind of person that can do something unless it's 100 percent. I needed to make a change and I needed to move.

Ultimate-Guitar.com: It's unfortunate that the band wouldn't even entertain your ideas.

Caggiano: Yeah, I never understood it, to be honest. I do understand it, but at the same time, I was with those guys for a really long time. You would think at some point along that journey, we would have collaborated on something. But it's totally cool. It is totally cool. I'm very proud of all our accomplishments, and I'm so proud to be part of the ANTHRAX legacy. We braved a lot of storms, and there were a lot of dark periods and great periods throughout that whole time. So I'm really proud of it.