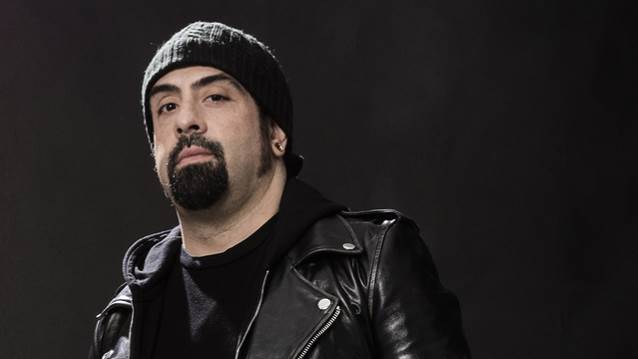 EonMusic spoke to VOLBEAT guitarist Rob Caggiano ahead of the band's Sunday night (May 27) show in Dublin. In the interview, Rob talked about the transition from ANTHRAX to VOLBEAT, the challenges of changing singers in his former band, and the status of side group THE DAMNED THINGS.

On the changes from ANTHRAX to VOLBEAT, Rob commented: "The VOLBEAT fan base is very diverse; we have a lot of ANTHRAX fans out there too in the crowd. There's something for everyone in the VOLBEAT sound, and that's what draws people in. So it wasn't that much of an adjustment for me, even stylistically as a guitar player."

The guitarist went on to explain why he's happier as a musician in VOLBEAT. He said: "This is more me than ANTHRAX, just because there's more guitar. It's not just solos; it's acoustic parts, it's overdubs, there's melodic things, and harmonies, and all kinds of cool stuff."

When asked about the status of THE DAMNED THINGS, the project that also features Scott Ian of ANTHRAX, along with members of EVERY TIME I DIE and FALL OUT BOY, Rob revealed that further material is likely, though not necessarily involving him. He said cryptically: "Yeah, there might be. Whether or not I'm a part of it, I'm not sure; we'll see. We shall see!"

Finally, a new VOLBEAT album is likely to see the light of day in 2019, with recording scheduled to begin before the end of the year. "We're probably going to do the record in two halves; we're going to do a little bit towards the holidays and finish it after the holidays", Rob said. "So depending on how everything goes, we'll see how the schedule shapes up. But that's the most immediate thing in the future; starting and finishing the record."

Find the entire interview at EonMusic.