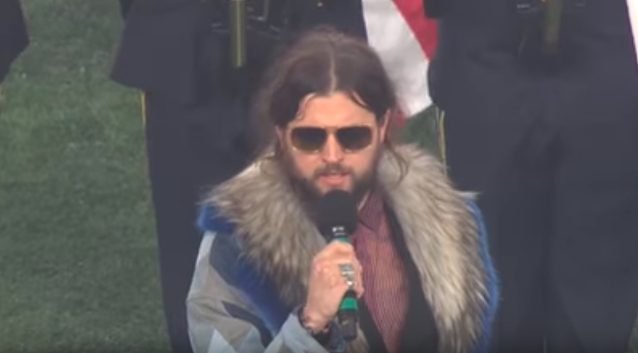 On January 4, Grammy-nominated artist Jay Buchanan of the RIVAL SONS performed the U.S. national anthem at the AFC Wildcard Playoff Game between New England Patriots and Tennessee Titans. Video footage of his rendition can be seen below.

Last fall, Buchanan spoke to "Cassius Morris Show" about the apparent role his band is playing in carrying the torch for rock and roll. He said: "I think about it. It's mostly when I'm talking to people like you. We're talking about where does RIVAL SONS fit in the popular vernacular? In terms of responsibility… there's no pressure or responsibility. I think that if we had set out trying to do a certain thing that was unnatural to us or if we were trying to fit into a mold, and if it were a difficult suit to put on, and it didn't fit right, I think you would have trouble that way, but I think that we've just done our thing our way from the beginning, right out of the gate. We just do it. I feel like the sound of this band is a lot of the tension, like the guys are real rock and rollers. [Mike] Miley's a big jazz drummer and everything, but then he plays rock and roll, and then Scott [Holiday, guitar] loves rock and roll and psychedelic music, much more than I do. I love rock and roll, and all of that, just like everybody does. For me, I'm much more of a singer/songwriter at heart. But rock and roll music was something I was able to do."

He continued: "When we got together, I had no plans on the band being a successful as it's been. I took it on as an, 'All right, let's get this band together as a side project.' Just get some kicks around Hollywood and play some rock and roll shows here and there. I had no idea there was such a void in the world for a rock and roll band. Talking about the pressure or anything like that, I just see we're part of that lineage. I look to bands before us, THE BLACK KEYS were doing their thing, then we had Jack White, who's really carried the torch for these bands. They're really doing hybrids of rhythm and blues music. I think it's great to hear people's hybrid version of that, then before them, you had Lenny Kravitz who has been going full steam the whole time making great records. The guy just makes great records. Consistently. He's really fun to tour with and to play with. Before when THE BLACK CROWES were playing together, they carried the torch when they were just themselves. I think we fit that blueprint. We're a typical rhythm and blues rock and roll band."