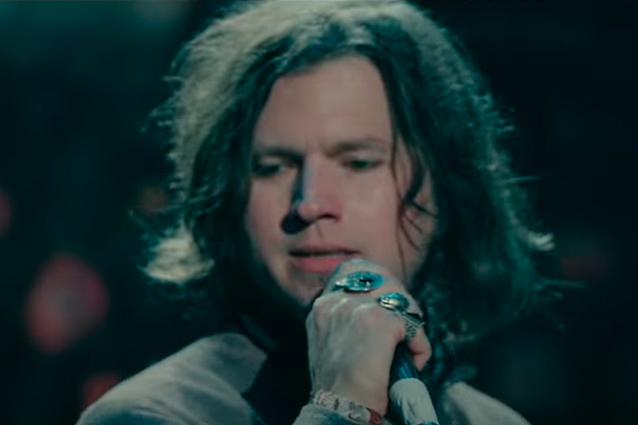 Two-time-Grammy-nominated group RIVAL SONS has shared an acoustic performance of its soulful single "Shooting Stars". The stripped-down take features vocalist Jay Buchanan providing a powerful solo version (with the help of producer Dave Cobb) of the song due to the conditions of the coronavirus outbreak.

Buchanan told American Songwriter: "[I] went down the road to Cobb's and set my mics up outside and tossed the cable ends to into his studio doorway. The densely wooded holler was really reverberating my voice back to me on the louder parts of the song. You can hear the birds and the dog barking throughout."

The studio version of "Shooting Stars" is the RIVAL SONS' current single and is featured on the band's latest album, "Feral Roots".

2019 proved to be a breakout year for RIVAL SONS who cemented themselves at the forefront of rock and roll's revitalization movement with a pair of nominations at the 62nd annual Grammy Awards. RIVAL SONS' acclaimed Low Country Sound/Atlantic debut, "Feral Roots", notched a nomination for "Best Rock Album," while their single "Too Bad" received a nomination for "Best Rock Performance." Produced by Grammy Award winner Dave Cobb at Nashville's famed RCA Studio A, and the equally legendary Muscle Shoals Sound Studio in Muscle Shoals, Alabama, "Feral Roots" is available now on all streaming platforms.

Comprised of Jay Buchanan (vocals), Scott Holiday (guitar), Dave Beste (bass guitar) and Mike Miley (drums), RIVAL SONS first heralded "Feral Roots" with the release of lead single "Do Your Worst", which hit No. 1 at Rock Radio. The album also features standout singles "Shooting Stars", "Back In The Woods" and "Sugar On The Bone".