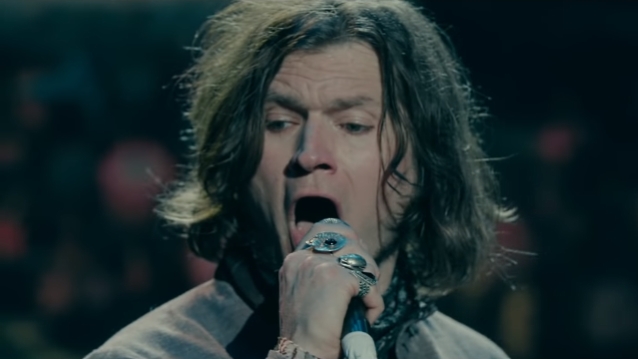 Long Beach, California's RIVAL SONS has released the official music video for the song "Too Bad" The track is taken from the band's latest album, "Feral Roots", which was released on January 25 via Low Country Sound/Atlantic Records.

Guitarist Scott Holiday told Guitar.com about "Feral Roots": "I think it offers a couple of things that you’ve never heard from the band before that you probably wanted to hear… I think. It's more expansive, but you don't have to worry about us going to Atlantic and selling our souls and being something crappy. They literally didn't do anything to bother us while we made it — they let us make the record that we wanted to make, and then they fucking loved it."

Regarding the songwriting process for "Feral Roots", Scott said: "We spent more time writing, passing things back and forth. We spent a week in this place called Hohenwald, Tennessee, we had this little writing cabin. It was real far out, really quiet and beautiful, and we would just wake up and start writing together, then go out into nature, swim in the creek and then meet back up later, make a fire and talk about the things we'd seen that day. It really set the tone for what we wanted to do, writing-wise, and gave us the energy. Then we went home and began to work on those songs, passing it around until things were beaten into shape.

"Once you're all together, something new is going to happen, and that's how we interact both onstage and when we record together," Scott continued. "We challenge each other, we're inspired, and we become improvisational to a degree. So you're still getting something that's to a degree unpolished, and is really in its first living moments."

The primal intensity of "Feral Roots" reflects a certain unrest at the heart of the album, sparked by singer Jay Buchanan's recent move to Tennessee. "With all the stimuli we're constantly receiving these days, I think a lot of people have a desire to live with more freedom and simplicity," noted Buchanan. "There's a longing for your truer nature to prevail, and to reclaim some sort of wildness." But with its nuanced explorations of art and love and truth, "Feral Roots" ultimately argues for pushing beyond pure survival instincts and striving for something more exalted: an unbreakable commitment to creating beauty of your own.