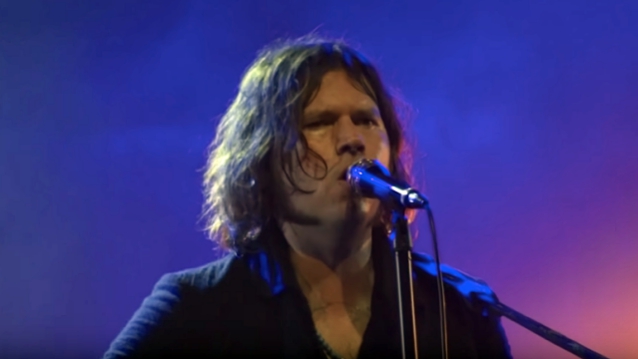 RIVAL SONS frontman Jay Buchanan says that he has "very serious trouble" with the current political situation in the U.S., explaining that "we have a lot bigger problems" in the country "than what's being focused on right now."

When asked in a recent interview with Sandra Hajduk if he thinks musicians should stay away from politics or if they should get involved, Jay responded (see video below): "I don't see any need for a musician to be quiet or to be silent when they feel like they need to say something. I think that for an artist, we have a platform where we can talk to a lot of people, and sometimes, for me, being an American, I look at our politics [and] I have serious trouble with it. I have very serious trouble with the current situation. It's very embarrassing, and it's really difficult.

"Some people will say, 'Okay, don't be political because you'll lose fans,' or something like that, and that just sounds terrible," he continued. "Well, why would you be quiet about something that's important to you just so you can make more money? Or people say, 'You just concentrate on your music. Don't worry about that stuff.' Well, when you have someone in office that is declaring a national emergency to build a wall between the United States and Mexico while Michigan doesn't have drinking water… We have a lot bigger problems in the United States than what's being focused on right now."

Buchanan added: "I'm not an overtly political person, and I don't think you have to be political to look at a situation and say that you think it's ridiculous. There's nothing political about that. So, the politicking is for the politicians, and having a social obligation and a moral obligation, that's just called being a human being. That isn't political. So when you see something that's unjust, it's okay to talk about it."