Two-time-Grammy-nominated group RIVAL SONS has announced a North American headline tour, set to get underway this spring. The coast-to-coast trek will see RIVAL SONS joined by special guests REIGNWOLF, THE WAR AND TREATY and JJ Wilde on select dates. The tour is set to kick off April 17 at the 1,900-capacity House Of Blues in Anaheim, California, and will include stops at the legendary Ryman Theater in Nashville, Tennessee (May 2), Huntington, New York's Paramount (May 13), Port Chester, New York's Capitol Theater (May 14), and more. Presale tickets for the tour will be available Wednesday, February 12, at 10:00 a.m. local time with public on sales starting Friday, February 14 at 10:00 a.m. local time.

In addition to the spring dates, RIVAL SONS will also perform at Gasparilla Music Festival in Tampa, Florida (March 17) alongside Brandi Carlisle and PORTUGAL. THE MAN, as well as at Panama City Beach, Florida's Sandjam (April 24) with WEEZER, WHITE REAPER and STRAND OF OAKS. Following the U.S. dates, RIVAL SONS will embark on a six-week European arena/stadium tour with AEROSMITH.

2019 proved to be a breakout year for RIVAL SONS who cemented themselves at the forefront of rock and roll's revitalization movement with a pair of nominations at the 62nd annual Grammy Awards. RIVAL SONS' acclaimed Low Country Sound/Atlantic debut, "Feral Roots", notched a nomination for "Best Rock Album," while their single "Too Bad" received a nomination for "Best Rock Performance." Produced by Grammy Award winner Dave Cobb at Nashville's famed RCA Studio A, and the equally legendary Muscle Shoals Sound Studio in Muscle Shoals, Alabama, "Feral Roots" is available now on all streaming platforms.

Comprised of Jay Buchanan (vocals), Scott Holiday (guitar), Dave Beste (bass guitar) and Mike Miley (drums), RIVAL SONS first heralded "Feral Roots" with the release of lead single "Do Your Worst", which hit No. 1 at Rock Radio. The album also features standout singles "Shooting Stars", "Back In The Woods" and "Sugar On The Bone". 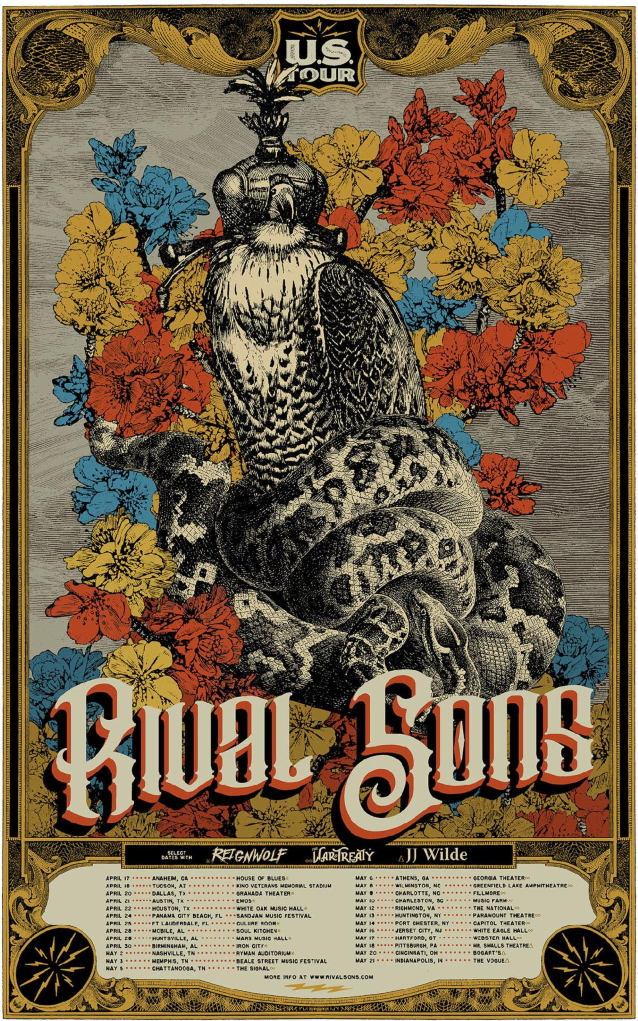