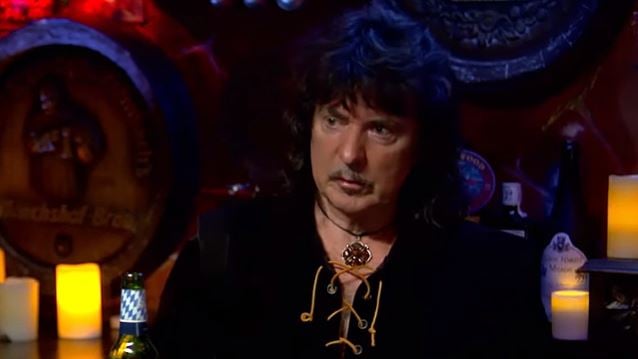 Legendary hard rock guitar pioneer Ritchie Blackmore (RAINBOW, DEEP PURPLE) underwent an operation in February due to an excess of uric acid buildup in his finger joint. He will be unable to play for about a month but this will have no effect on the upcoming shows this summer.

The pictures below show Ritchie after the operation.

Blackmore told "Rich Davenport's Rock Show" last year about the future of BLACKMORE'S NIGHT, the medieval/renaissance group he formed in 1997 with his now-wife Candice Night: "I think the biggest enemy is things like arthritis, which is creeping up on me in my hands, so I have to combat that. And, of course, when you get to my age, you start thinking that we can kind of play anything."

DEEP PURPLE singer Ian Gillan last month defended the band's decision to only perform with the group's current lineup at the upcoming Rock And Roll Hall Of Fame induction, explaining that "there is no slight intended nor any desire to upset anyone" with this move.

The Rock And Roll Hall Of Fame induction ceremony seemed like a rare opportunity for DEEP PURPLE to reunite with Blackmore, who wrote many of the band's most memorable riffs, including "Smoke on the Water", but hasn't played with the group since 1993.

But Gillan has since confirmed that no such reunion will take place, saying that only "the living breathing DEEP PURPLE" will play at the event, which will take place on April 8 at the Barclays Center in Brooklyn, New York.

Ritchie recuperating after his finger operation