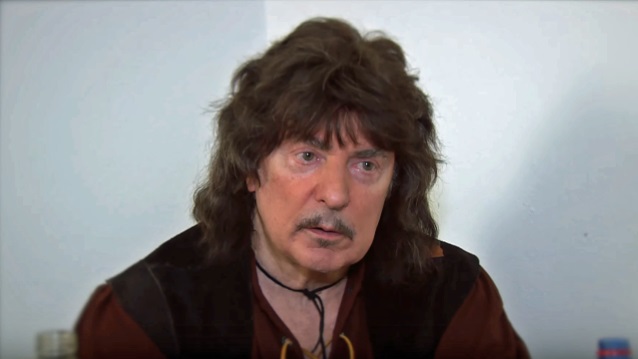 Ritchie Blackmore says that the current incarnation of RAINBOW is "the best lineup" the band has ever had.

Asked by Eclipsed magazine about his more subdued style of playing and less aggressive stage presence compared to RAINBOW's earlier days, Blackmore said: "I think that Ronnie is a very good performer and he gives the rest of us the freedom to concentrate on what we're doing. For some time I thought that it's very important to be very fast on the guitar, and some of the songs need that kind of fast playing, but at some point in my career I knew I don't want to come from A to B with as many notes as possible. Today I think less is more. Looking back on our first [comeback] shows [in 2016], I think that we should have rehearsed a bit more and the shows would have been a lot better. I also think that I didn't really perform every song of the set quite well."

Adding that "playing with unknown musicians is much more inspiring" than sharing he stage with well-established performers, Ritchie said that "it's really a lot of fun to play with this band. The other guys are getting more and more confident. And Ronnie Romero is a fantastic singer. On the other side, I'm happy to play for all the fans that grew up with my old music. The shows in the very big halls or arenas are almost to completely sold out."

Asked how he would compare the current RAINBOW lineup to all the others, Ritchie said: "I will say something now that is probably gonna upset a lot of Cozy Powell and [Ronnie James] Dio fans, but that's really how I think: this lineup is the best lineup RAINBOW ever had. On the other side, I'm always in the now on stage and off stage, which means that I had always loved the current lineup of any band I was in the most."

Former RAINBOW and DEEP PURPLE singer Joe Lynn Turner last year slammed Blackmore for the guitarist's decision to go out and perform the two bands' classic material with a new group musicians instead of reforming RAINBOW with a more "authentic" lineup.

Less critical of the new RAINBOW lineup was former DEEP PURPLE bassist/vocalist Glenn Hughes, who admitted to Metal Express Radio last year that he had watched some YouTube clips of the new RAINBOW lineup performing in 2016. "Singing Ronnie's [James Dio] songs needs a special kind of singer and I think the young chap did a reasonably good job and I think Ritchie may well have found the guy for him," Hughes said of Romero. "He was certainly a good fit for RAINBOW."