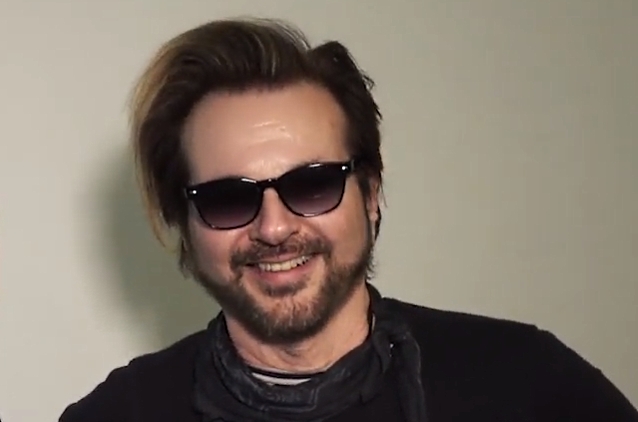 Rikki Rockett says that he hopes POISON will make some new music in the not-too-distant future. "I'm always up for working and writing and recording with POISON," the drummer told VintageRock.com at this past weekend's NAMM show in Anaheim, California (see video below). "It's my baby, it's my life's work, so I'm always up for it. And hopefully we'll get our shit together and go do it."

Last month, POISON singer Bret Michaels told Newsday that the band "is looking forward to returning in 2020 with some new songs."

In a 2017 interview, Rockett acknowledged that part of the reason POISON hasn't been motivated to work on new music has been the fact that fans rarely show interest in hearing fresh material performed live when classic rock groups go on tour. "We could write the second coming of 'Talk Dirty To Me', and I don't know if people wanna hear it or not, and that's a frustrating thing; it really is," he said. "AEROSMITH was able to do it, but not everybody is. I mean, even THE ROLLING STONES have had problems with that in the last few years. So… I don't know. But I do think it's important to stay viable. For the 'über fans,' it's always a really, really good thing. And that's what you do it for — you do it for you, you do it for the real fans, the real true fans."

Rockett also admitted that he and other members of POISON harbor some resentment toward Michaels, whose frequent tours as a solo artist caused the band to take a five-year break from the road.

"I think we need to get away from each other and do other things, but at the same time, I think he spent a little too much time away," Rockett said. "There's definitely some resentment, but not resentment like I want him to fail. I want him to do good. I just want POISON to be important too, and I would like [him] to put a little more energy into POISON."