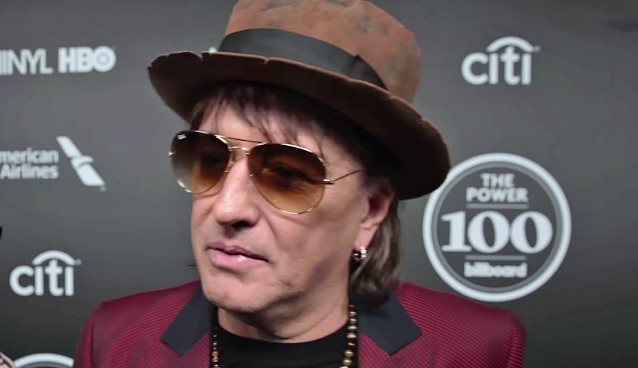 Richie Sambora says that he would be willing to reunite with BON JOVI for a one-off performance, should the band finally get enough votes to get into the Rock And Roll Hall Of Fame. BON JOVI is nominated for induction for the first time since 2011.

The 58-year-old guitarist, who joined in 1983 and co-wrote most of the group's iconic hits over the following three decades, told the "Trunk Nation" show on SiriusXM channel Volume about BON JOVI's nomination: "It's a big honor, but to be honest with you, I feel like I'm already in the Hall Of Fame, because I've been playing with my peers and these guys that are in the Hall Of Fame, whether it's Bob Dylan or Jimmy Page and all these guys, for a long time. Anytime you walk onstage with Buddy Guy or B.B. King or something like that, I felt like I was already in Hall Of Fame. But it's still good to be recognized, obviously, and all that. It's a thrill."

Sambora hasn't played with BON JOVI since he left the group in 2013, but he says he is open to performing with his former bandmates again on April 14, 2018 in Cleveland if BON JOVI finally gets the nod.

Sambora told Billboard that he already knows which songs he would like to play at the induction ceremony.

BON JOVI's frontman and namesake told People last year that Sambora abruptly left the group during 2013's "Because We Can" tour.

"There was no fight or money issues, like the reports say," Bon Jovi said. "Nobody expected Richie to quit in the middle of the night for no reason. He wasn't fired; he just didn't come to work."

All of the Rock Hall nominees had to have released their first recording no later than 1992 to be eligible.

The induction ceremony will take place at the Public Auditorium in Cleveland. It will be televised later on HBO.