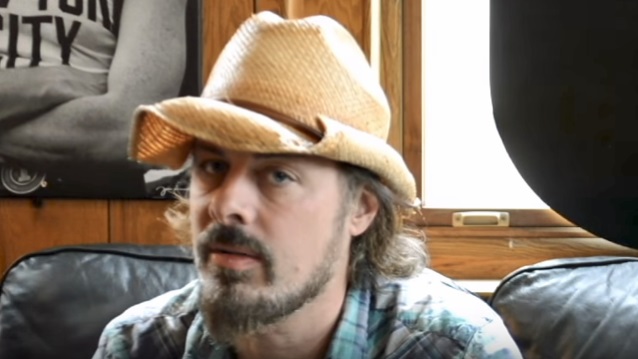 In a brand new interview with Sofa King Cool, guitarist/vocalist Richie Kotzen was once again asked about the status of THE WINERY DOGS, his power trio with drummer Mike Portnoy (DREAM THEATER, AVENGED SEVENFOLD, ADRENALINE MOB) and legendary bassist Billy Sheehan (MR. BIG, TALAS, DAVID LEE ROTH). "We did the first record [2013's self-titled album]; it did really, really well," he said (see video below). "I mean, it really did well, that record. Considering what was going on — or what is going on — with record sales, that record did really well. And so, because of that, we dove right back into another album cycle [with 2015's 'Hot Streak']. And after that album cycle, I thought it made sense to kind of take a break, because it's, like, you're not always gonna roll the point. You know what I'm trying to say? Not to take a lead off the 'Hot Streak' title… The last record was called 'Hot Streak', and it had a gambling connotation."

He continued: "But, anyway, I thought in my mind, 'Well, this worked. It was fun. It was really cool. But I kind of wanna go back to being Richie for a while and doing what I was doing before.' And Billy has a franchise band with MR. BIG; they continue to make great music and tour. And Mike, although I'm sure he loves playing with THE WINERY DOGS, his ability on the instrument and his style, with the progressive rock thing, that's something he needs to do too, 'cause that's in his blood — he's gotta do that. So it makes sense that we would go back and do what we were doing before. But it also makes sense that, eventually, we'll reconvene and do something again."

In 2016, THE WINERY DOGS completed a tour in support of "Hot Streak", which was released in October 2015 in North America via Loud & Proud Records.

THE WINERY DOGS' May 27, 2016 performance at Teatro Cariola in Santiago, Chile was professionally filmed and recorded for a DVD and Blu-ray, "Dog Years: Live In Santiago & Beyond 2013-2016", which was released last August via Loud & Proud.

THE WINERY DOGS reunited for its first live performance in almost a year in August 2017 during the "Ultimate Jam Night" at the Whisky A Go Go in West Hollywood, California. The event honored ADRENALINE MOB bassist David "Z" Zablidowsky, who died in a tour accident.

Kotzen's 21st solo album, "Salting Earth", was released in April 2017 via his own custom label, Headroom-Inc.

Mike and Billy are currently involved in a new project called SONS OF APOLLO, whose debut album, "Psychotic Symphony", was released last October by InsideOut Music.