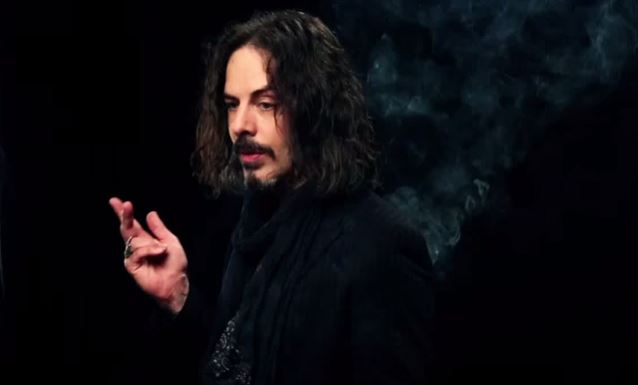 THE WINERY DOGS guitarist/vocalist Richie Kotzen, who made a name for himself via his hard rock, blues-influenced solo albums, perhaps got his most notable exposure during his one-album stint with glam rockers POISON in the early '90s. Many regarded it as an odd pairing, having the guitar virtuoso step in for the significantly less technically proficient C.C. Deville. But Kotzen explained to "Another FN Podcast With Izzy Presley" that it made sense on some level, even if it didn't on others.

"I've gotta say, I have nothing but great memories from that time," he said (hear audio below). "To this day, when I think about it, I think we made an amazing record. I went from being on Shrapnel Records with my little fan base that followed me — and I say 'little' not in a derogatory way, but it literally was a small group of people that knew who I was — and suddenly I joined a band where more people knew who I was. However, I joined a band that really opened the creative door for me to do whatever the hell I wanted. I mean, that 'Native Tongue' record could have easily been my solo record; I mean, they let me do whatever I wanted. And the only difference is that I co-wrote the lyrics with Bret Michaels, and he was the lead singer. But they couldn't have treated me better on a creative level during that process. I was coming from Shrapnel Records where, if we spent twenty grand on a record, we were in big trouble, and our budget for the POISON record was two and a half million dollars back in 1991. So it was a whole different world that I was thrown into, but I was ready for it, and I think we made an amazing record. Where it got really kind of hard, and suddenly it was like a wake-up call and I realized, 'Oh, this is not your band, dude,' was when we got on the road, and suddenly we're only playing two songs from the new record, three songs, and I'm up there playing songs that — not that they're bad, 'cause they're good songs and people like those songs, and they sold a lot of records — just didn't connect with me. They had a song called 'Ride The Wind' that I can remember playing and thinking, 'I have no emotional connection to this whatsoever. I could be reading a book right now. I'm not here. I'm not present. I'm not enjoying this.' And then, obviously, things happened and I moved on. But the process of making the record, doing the press, doing the videos, everything up until the point when we got on the road, was fantastic."

Kotzen also played down the story about him dating drummer Rikki Rockett's ex-fiancée, which many believe got him ousted from group, saying that he has long since made up with his former bandmates. "I saw Bret since then," he explained. "He hugged me and said he loved me and congratulated me on how well I'm doing. I've seen Bobby [Dall, bass] multiple times. I saw Rikki once and shook his hand and said hello. Everything is completely fine. Whatever happened back then, I will tell you the truth of the matter is that it was really sensationalized; it wasn't nearly as insane as what was put in the press. They needed a story, 'cause the tour was bombing and the band was going into oblivion, so to speak. So, you know, they needed a story… But, in the end, we're all on good terms."

THE WINERY DOGS, which also features drummer Mike Portnoy (DREAM THEATER, AVENGED SEVENFOLD, ADRENALINE MOB) and legendary bassist Billy Sheehan (MR. BIG, TALAS, DAVID LEE ROTH), will release its sophomore album, "Hot Streak", on October 2 in North America on Loud & Proud Records via RED (a division of Sony Music Entertainment) and in the rest of the world via earMUSIC. It is preceded by the first single, "Oblivion", which was made available on August 25 at radio. A double vinyl edition of the new album is also in the works and is due out in early November.