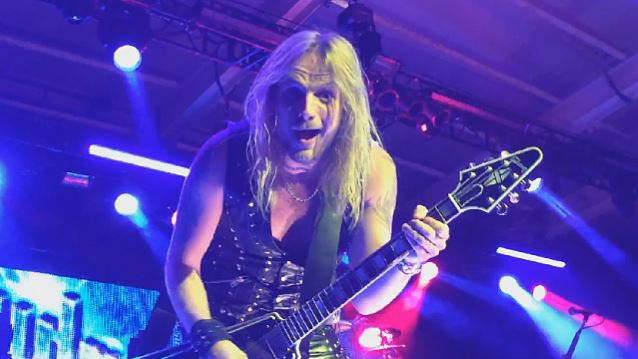 Co-host Jimmy Kay of Canada's "The Metal Voice" recently conducted an interview with JUDAS PRIEST guitarist Richie Faulkner. You can now listen to the chat in the YouTube clip below.

Asked what his reaction was when he first learned he had been picked to replace founding JUDAS PRIEST guitarist Kenneth "K.K." Downing in early 2011, Faulkner said: "The first call I got was obviously to tell me a brief idea of the situation, and to invite me down and kind of audition, meet the guys. So it wasn't by any means a done-and-dusted deal — I was only being considered for the role. But when I actually went back to Glenn's [Tipton, JUDAS PRIEST guitarist] and he told me that I got the gig, I was kind of… obviously over the moon, but the thing was we couldn't announce anything officially for another month. So I couldn't tell too many people, I couldn't go and party and just tell the world, I had to kind of keep it under the hat for about three or four weeks, and then we officially announced it and then I could go absolutely ballistic. So it was containing that excitement inside without telling anyone about it, it was an incredibly difficult thing to do, but we managed it. But you can imagine the excitement that you can feel when you get the gig in one of the biggest heavy metal bands of all time."

He continued: "The music business is a fickle industry, and I've learned time and time again that you don't count your chickens before they hatch. Wait and see and do your best, and until it's happening, it's not happening, if that makes any sense. So I knew that this was an opportunity that I had, I knew that I could do the opportunity, it's just kind of, 'It's not happening until it's happening,' and luckily it worked out, and it did happen, and here we are today talking to each other."

JUDAS PRIEST's latest album, "Redeemer Of Souls", marks the band's first release with Faulkner, who was most recently guitarist in the backing group for Lauren Harris (daughter of IRON MAIDEN bassist Steve Harris).

Asked by Premier Guitar if he was concerned how the new band dynamic with Faulkner would impact the writing process for "Redeemer Of Souls", Tipton said: "We hadn't worked with Richie before on a writing level, so the first couple of things he presented to us were quite crucial. It was amazing, because everything Richie came up with was just so PRIEST, and it evolved from that point on. For the first time ever, we actually wrote on the road. Richie would go down in the afternoon, set up his recording rig, and kick stuff out. When we had time off, we sat down and started piecing everything together. What we normally do is write our own ideas — including Rob's [Halford] lyrics and vocals — pool them, and before you know it, it takes shape into songs."