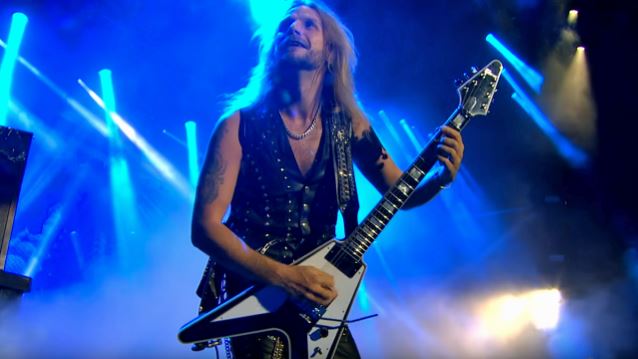 JUDAS PRIEST guitarist Richie Faulkner has told Guitar World magazine that he and his bandmates will meet up next month to "see what ideas [they've] got" for the planned follow-up to 2014's "Redeemer Of Souls" album. He said: "I'm always coming up with riffs or melodies. We get together to pore over the ideas. Hopefully the ideas are great. We have a big legacy to uphold. These guys have been doing this for forty years. 'Redeemer' was the first Top 10 entry on Billboard that the band has ever had. It's a great springboard, if you will. We're looking forward to getting into the studio and seeing what we've come up with."

JUDAS PRIEST singer Rob Halford told the Q104 radio station in Halifax, Nova Scotia, Canada about the band's plans to record the follow-up to "Redeemer Of Souls": "Well, you know, in rock and roll, you've gotta kind of strike while the iron is hot, and that iron has been burning hot for decades for PRIEST now. It doesn't show any sign of cooling off, I can tell you that. The cool thing about where we're at right now is, of course, having Richie with us and having gone through that first writing experience together [on 'Redeemer Of Souls']. We were so motivated to keep writing as we were going along, but our label had a time schedule for us to keep, so we had to put the brakes on and start recording the songs that we'd written. And with that in mind, we're raring to go again, and I'm sure there'll be another PRIEST record in the not-too-distant metal future."

JUDAS PRIEST guitarist Glenn Tipton described the band's songwriting process in a recent interview with A Journey Of Musical Things. He said: "You should never really sit down and contrive a mood or a character of your next album. You should let it flow from you naturally. As soon as you try and do something, then it's taking away the spontaneity and the excitement and the creativity. When we go into a writing session now, it's exciting, 'cause we never know what we're gonna end up with. At the end of the day, we might have another PRIEST classic under the belt. You let it run — that's what we do — and when the room lights up, we know we're on to something."

JUDAS PRIEST's new CD/DVD/Blu-ray, "Battle Cry", will be released on March 25 via Epic Records. Recorded live on August 1, 2015 at Germany's Wacken Open Air festival in front of an audience of 85,000, the set is available on a 15-track CD, with the entire show on Blu-ray and DVD (running over 94 minutes), as well as digital audio and video formats. The DVD and Blu-ray also contains three bonus tracks shot in Poland on December 10, 2015 at The Ergo Arena, Gdansk, Poland.