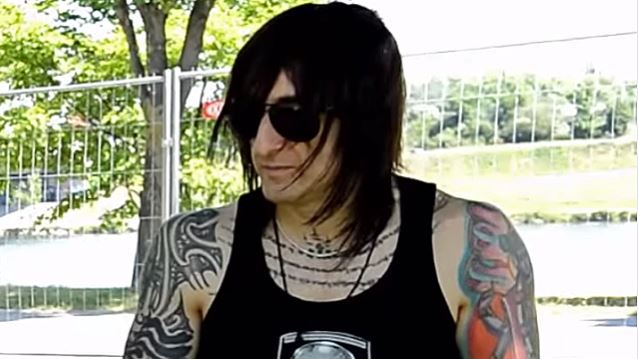 During a brand new interview with Austria's Stormbringer webzine conducted on June 6 at the Rock In Vienna festival, GUNS N' ROSES and THE DEAD DAISIES guitarist Richard Fortus was asked about rumors that GN'R was working on the follow-up to "Chinese Democracy" and when fans can expect to see new activity from the Axl Rose-fronted band.

"We're gonna be doing stuff next year," Richard responded (see video below). "There's… We're not gonna have anything out this year. Yeah… Next year…. Next year, it should be out. And we'll be touring."

Rose, guitarist D.J. Ashba and other members of the current lineup have hinted at material recorded during the "Chinese Democracy" sessions that has yet to surface.

"Chinese Democracy" re-entered The Billboard 200 chart in April 2011 after it was made available at BestBuy.com for a reduced price of $1.99.

Best Buy was the exclusive U.S. retailer for "Chinese Democracy", reportedly paying $14 million for 1.6 million copies. But the album was a major sales disappointment, moving less than 750,000 copies to date despite the curiosity and hype surrounding its release.

The CD was officially certified platinum by the Recording Industry Association of America (RIAA) on February 3, 2009 for shipments in the United States in excess of one million copies.

"Chinese Democracy" came out 15 years after its predecessor, 1993's "The Spaghetti Incident". It took more than a decade to record, during which every original member of the band except Rose was replaced and four different producers were used.