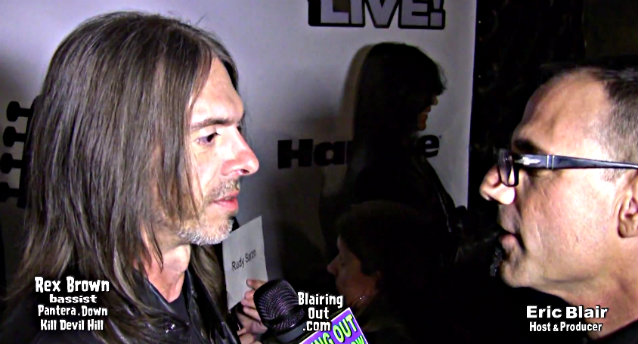 Eric Blair of "The Blairing Out With Eric Blair Show" conducted an interview with bassist Rex Brown (KILL DEVIL HILL, DOWN, PANTERA) at the Bass Player LIVE! Concert & Awards Show, which was held November 9 at the historic Fonda Theatre in Los Angeles, California. The concert honored heavy metal legend, BLACK SABBATH's Geezer Butler, and featured an all-star band of rock luminaries performing BLACK SABBATH songs as a tribute to Butler. The performance culminated with Geezer joining the band for the finale.

Brown's chat with "The Blairing Out With Eric Blair Show" can be seen below.

KILL DEVIL HILL took its new material on the road for a headlining club tour that kicked off October 26 in Ramona, California and ran through the month of November with support from labelmates EYES SET TO KILL and GIRL ON FIRE, as well as BLACK WATER RISING.